I’ve been to South Korea many times but have always wanted to go have a look at North Korea and was able to make it eventually.

I was there from September 2 to 8. 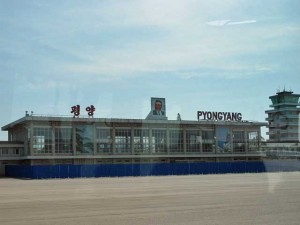 The hotel they put us in was the thousand-room Yanggakdo International Hotel, one of the best, and is said to be the largest hotel in all North Korea, but not all elevators were working, the revolving restaurant didn’t revolve and airconditioning was non existent. I know why this happened. I am not complaining. Just stating a fact. 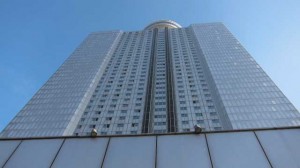 I won’t even begin to talk about the standards of housekeeping!

That’s North Korea for you.

We departed midnight on a chartered Soviet Tupolev plane and made an unscheduled stop at Ho Chi Minh City for refueling before flying all the way to Pyongyang.

No one was told there would be a stopover in Vietnam.

Service on board was dismal. Eight of us occupied the business class cabin but as far as the crew was concerned we might as well be in cattle class.

North Korea has a long way to go before they can do tourism well.

For a nation forever suspicious and paranoid of foreigners, this will continue to be a major challenge as it tries to earn some badly needed tourist revenue.

The crew did nothing to stop the constant stream of economy class passengers from using our toilet or engaging in loud conversations while waiting to use our toilet.

It was a red eye, but the light in the cabin was never switched off and loud music blared from speakers. It was impossible to sleep.

Our group was assigned a guide and a minder. Picture shows Singapore guide, North Korean minder and North Korean guide: 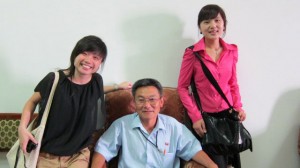 I suspect the minder’s job was to keep an eye on the guide and of course on each one of us.

As for the North Korean guide, I’ve never seen a more disinterested tour guide – not once did she made eye contact with me, she made no attempt to engage us, said the minimum required of her job and did not hesitate to admonish us. When told to go slow during a temple tour, she rebuked “You people should hurry.”

A tour member thought he had lost his tripod and told the guide, but when he discovered that the tripod wasn’t lost, the minder scolded him “You make trouble, you know.” Dour communist ideologues to the core!

One guy in our group pinched the cheek of a little toddler and then shot a video of the child, he was told to delete the video by some shady characters – actually officials – who suddenly appeared from no where.

That’s North Korea for you. Big Brother is everywhere.

In fact, I looked out from our tour coach and noticed that at every interval of eight trees or so, there would be two women standing around  –  “secret service” types watching, observing, taking note of people’s behavior.

And North Koreans were well behaved indeed. Each wore a badge with Kim Il Sung’s picture. I’ve never seen brain washing and mass mobilization to this extent – more of this to follow in my posts in the next few days.

Throughout our stay our itinerary was tightly controlled, they showed us what they wanted us to see. There was no question of anyone of us taking a stroll in the park on our own. Nothing could be done unaccompanied. This is like China when I first visited more than 30 years ago.

I’ve been to the other three communist countries in the world – China, Vietnam and Cuba – but North Korea is something else.

Well, one thing in common in all these countries appears to be some really beautiful sights and sceneries  and I will show more photos in the next couple of days.

For now, here’s a shot of the view outside my room one morning: 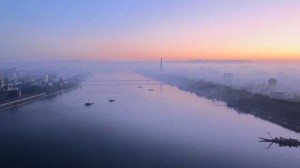 Other shots of Pyongyang: 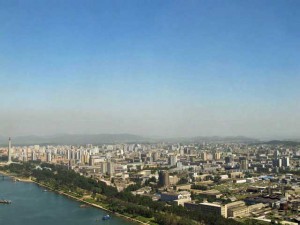 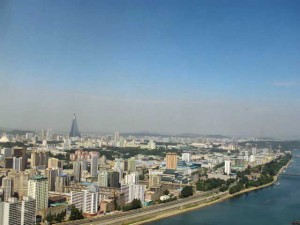 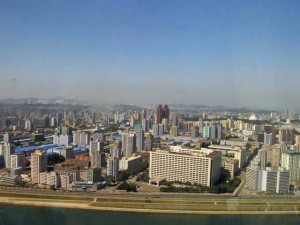 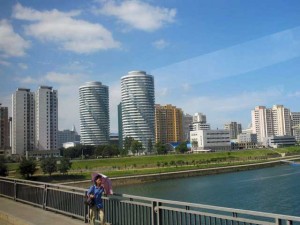 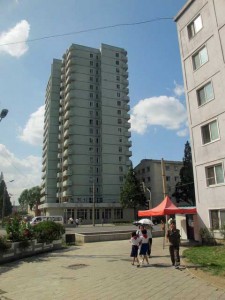 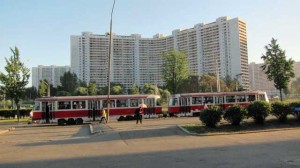 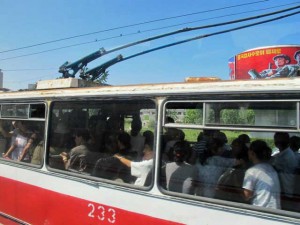 Too bad the same cannot be said for the food.

Some of us complained that the food was bad, and the guide responded “You are here for sightseeing, not to eat our food.”

How bad was it?

(Again, I know the reasons for the poor quality food. Again, I’m not complaining. Just stating a fact.)

Most time, we were served kimchi, fried eggs, lots of potatoes in all forms, and grayish rice that was sticky and lumpy plus salted fish and soup with dubious ingredients such as this: 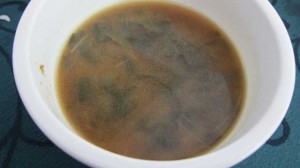 Often we had garlicky bean sprouts, aubergines and wild mountain plants of some kind; is this the best that Juche can produce? 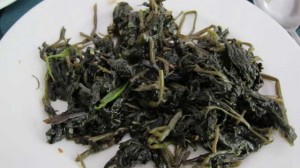 Dumplings made their appearance several times but I could not determine what was inside them: 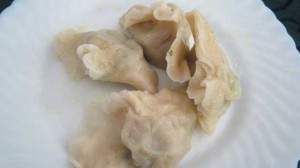 When we were lucky to get pork it was always pork fat; very very fatty: 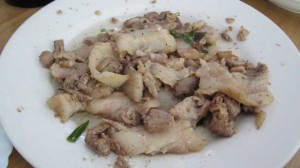 Once I was so happy I almost wet my pants when I saw duck but was sorely disappointed that it was parts of a duck head; see the neck? 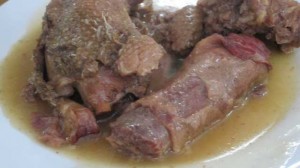 We were delighted to get crab once: 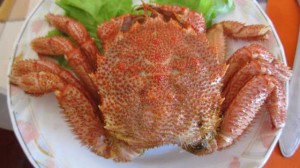 On day four we were taken to a supposedly famous grilled duck restaurant for dinner. It turned out that plates of raw duck meat were served. We were supposed to grill the meat ourselves using a little grill placed on our tables. The pieces of duck meat were not fresh – they look greenish, and smelled really fetid. There been no other meat, I had no choice so I ate three pieces of what I thought were rather well-grilled ones but immediately suffered from food poisoning. I had diarrhea for the rest of the trip. Kim’s revenge huh?

Undoubtedly one of the best meals we had was something we paid for with our own money one night at one of the eating places at our hotel – we had Naengmyeon (cold noodle) a dish said to have originated from Pyongyang: 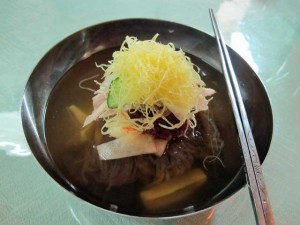