In August 2007, the Arirang Festival Mass Games display was recognized by Guinness World Records as the biggest event of its kind.

It is held annually every night for a couple of months in Autumn and a third-class ticket costs €80/-.

I was there on September 3.

What I found truly amazing was the wall of “human pixels” – placards held by some 30,000 North Koreans enabling the background scenes or backdrops to change.

There was even one scene that looked like a Thomas Kinkade painting! Look at the fifth photo below: 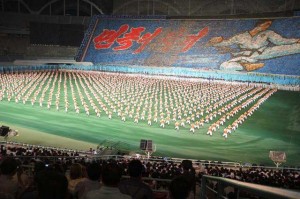 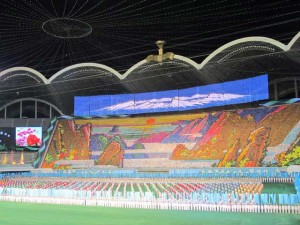 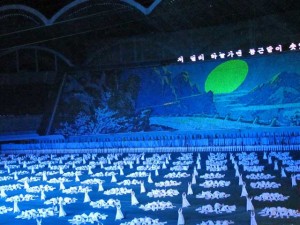 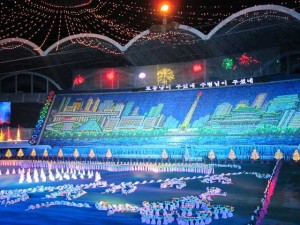 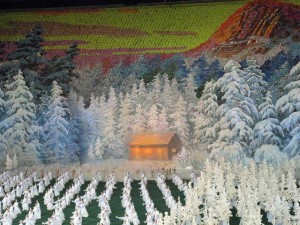 According to a bit of online research, the Arirang Mass Games display possesses an important ideological character praising the Workers Party of North Korea, its armed forces, Kim Il Sung the father and Kim Jong Il the son.

These messages may not be clear to foreign spectators who are not aware of North Korean iconography: a rising sun symbolizes Kim Il Sung. When a gun is shown, it signifies the gun which Kim Il Sung gave to his son Kim Jong Il. The color red, particularly in flowers, stands for the working class. And the color purple and purple flowers represent Kim Il Sung. (In 1965, the Indonesians named a purple dendrobium orchid “Kimilsungia” to honor Kim Il Sung.)

(The flower “Kimjongilia” is a red begonia cultivated by a Japanese botanist to honor the younger Kim.)

A snowy mountain with a lake represents Mount Paektu where Kim Jong Il is said to have been born in a log cabin, blah, blah, blah.

To me the Arirang Mass Games display symbolizes the ultimate in mind control and a dictatorial grip on an entire nation forced to idolize its dietified leaders and to do their bidding unquestioningly.

If you think this Orwellian phenomenon is only possible in North Korea, you are wrong.

It happens everywhere and can happen anywhere. 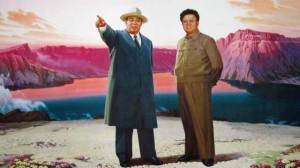 Just take a bellicose leader who bullies his people into submission, who eliminates all dissent, and who rules by fear, who instills paranoia and a siege mentality by warning about external threats, who forces the cowering minions to accept the fact that dynastic succession is perfectly acceptable, that it is the divine right of the elite and their sycophants to be entitled to their Louis XIII and other perks while the worker bees – hoi polloi – should be thankful that they even have rice and kimchi to eat and a roof over their heads. What a way to treat people!

Sounds familiar? Yes, just look at the banana republics around you, my friend. It’s a tried and tested operating model indeed.

Several days later, away from the Arirang Mass Games I was fortunate to chance upon a rehearsal at the huge Kim Il Sung Square (which can accommodate up to 100,000) for September 9’s Founder Day’s celebrations. 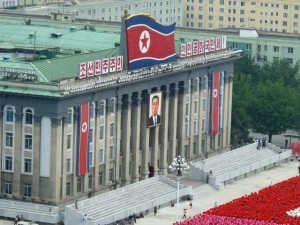 The red in the picture below is actually tens of thousands of North Koreans carrying stalks of flowers.

One flick of their flowers and some no doubt self-congratulatory messages in white suddenly appeared! 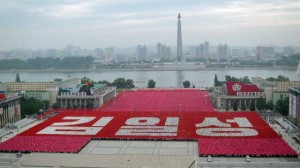 Others may be awed by this extraordinary spectacle, but I find the Arirang Mass Games display – and the rehearsal for Founder’s Day – rather creepy, to be honest.

Yet the creepiest thought must be reserved for the leaders of such police states and kleptocracies, and this thought is: such tyrants won’t last indefinitely. The Lenins, the Hitlers, the Stalins, the Ceausescus, the Karadzics, the Marcoses, the Pol Pots, the Miloševics, the Suhartos, the Saddams, the Mubaraks, the Gaddafis of this world eventually got their comeuppance, didn’t they?

People will wise up and rise up one day, and the oppressive ruling elite will bite the dust.

There is hope yet for the long-suffering North Korean people.

I applaud their resilience.