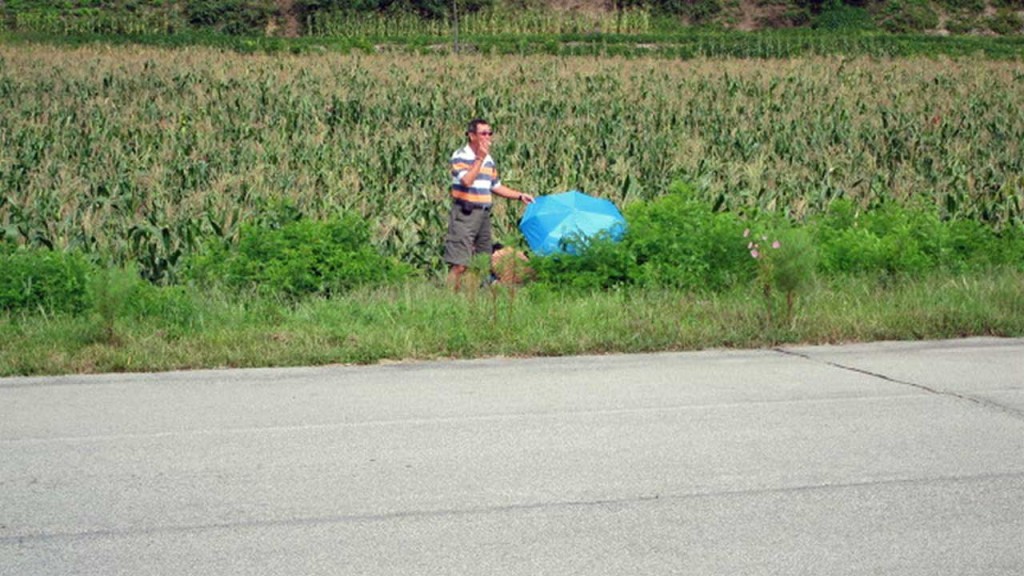 Natural "toilet": Tourist having a smoke while shielding his wife as she contributed to organic farming in North Korea - at least they didn't have to deal with transvestites.

The North Koreans have been conditioned to abhor and loathe foreigners.

They are also extremely paranoid of them.

Not surprising, considering the history of their country. Foreigners have always been the ones to cause them grief.

And their hatred of foreigners would be a major impediment to their earning sorely needed tourist dollars. (Last year, apparently only 24,000 foreigners were let in as tourists.)

Our North Korean guide was an emotionless, frigid young lady who did the minimum her job required.

The senior minder kept a watchful eye over her and over the rest of us.

Despite that, still, I wouldn’t call them – or other North Koreans I encountered – assholes.

Well, you’ve guessed it – I am referring to the Singaporeans in my tour group.

I know, it’s sad that my harshest words are reserved for my fellow Singaporeans.

I have never liked conducted tours. A busload of 30 strangers sightseeing and eating together had never appealed to me. The last such tour I was on must have been one of those Nam Ho 7-day West Malaysian tour I was put on when I was a kid.

But short of flying to Europe and joining one of those trips organized by tour agencies there to North Korea, I had no choice but to visit the hermetic country with Universal Travel Corporation, based in Chinatown, Singapore.

Universal charters a flight almost every year to North Korea and has been doing so for a couple of years now.

For some reason, the majority of local tourists who signed up are elderly people.

In my bus of about 30 Singaporeans, we had at least five elderly couples in their 60’s and 70’s.

Most – not all though – of the elderly folks were okay, rather civil and decent people I must say.

The worst behavior came from the younger Singaporeans in the group.

And many of these are rather well-traveled people – people who had gone on other “exotic” trips organized by Universal and other tour companies to places like Mongolia, Bhutan, Brazil, even Iran!

They say travel broadens the mind, but I didn’t see any evidence of that here.

Three middle-age sisters in my bus caused the most brouhaha. They fought to buy wortheless tchotchkes, they yakked on top of their voices, they guffawed like hyenas and they complained loudly all the time.

We were told at the pre-departure briefing that this being North Korea, to expect last-minute changes to our itinerary.

That almost caused a riot with the sisters. They stood up, they screamed, they accused, they condemned, they demanded, they made such bloody fools of themselves I was very ashamed to be a Singaporean.

If these retards were not embarrassed by their crass behavior, I was embarrassed for them.

Some of them even deliberately asked stupid questions of the North Korean minder and guide such as “Do you like North Korea or do you prefer South Korea?” just to provoke them.

And talking about stupid questions, a classic was a question that actually emerged during the pre-departure briefing. One idiot asked “Will the Great Leader himself be there [at the Airirang Festival Mass Games Display]?”

I almost had a coronary suppressing my laughter.

That question took the cake, man.

Another stupid question: “What is the safety rate of the bus driver?”

“Can we get pizzas? (I hate kimchi!)” was another good one.

At one toilet stop we were told that the toilet could not be used because there was no water. One idiot told the guide “So? We pay money lah. Can use toilet now?”

Why does everyone tries so hard to be comedians, I wonder.

During the tour, some even tried to tell the guide what to do. “Don’t you think it is too early for dinner? How about dropping us at the hotel for a change and shower, then take us to dinner?” “Why are you not taking us to this or that monument?” Ad nauseam.

Hello, fucktard, this is North Korea, they don’t think like you do, most actions defy logic and if Kim and his ilk want you to have dinner at 6pm, you jolly well have dinner at 6pm ok? Thank your lucky stars you are actually going to get food when the natives are chewing on tree barks! North Korea’s growing food crisis risks leaving six million people without enough to eat in a country where a third of children under five are already malnourished, UN food agencies said just last week.

Then there was a very selfish lone wolf who made it a point to plonk her ass in the front row of the coach every day so that she could get the best view.

Once at lunch she “commandeered” an entire fish meant for four persons for her own consumption. The rest of the people sat silently watching that bitch stuff her face!

Some people simply have no idea that they have made themselves so frigging obnoxious.

Mind you, these are well-traveled, supposedly educated people, who had even lived overseas – Singaporeans with “international experience.”

The alpha bitches, the douchebags and the scumbags.

They were all there.

Then there was another idiot who insisted on doing things that would place the entire group in jeopardy such as wandering off into “forbidden territories” or wanting to set off on his own without the guide’s knowledge.

I was told by reliable sources that any infractions by us would be interpreted by the powers-that-be that these acts of misconduct were due to the inability of the North Korean minder and guide to “control” us and that they would face the music accordingly.

Another solo traveler refused to move to the last row in the coach and because of that some of the elderly couples could not sit together. And a family of four had to break up as a consequence.

In retrospect, it didn’t surprise me.

Our system has resulted in a population of “me-first” Singaporeans who must win at all costs, at the expense of others.

One day, during a toilet break, I stood behind an old man.

He suddenly turned around and screamed at me “Hey you, this is a women’s toilet!!! The male toilet is over there!”

It turned out that this “old man” was a woman.

How the fuck do I know?

I couldn’t have known. Her hairstyle was like that of a man’s. She dressed like a man, in polo shirt, jeans and track shoes. She looked like a man. She even sounded like a man. Gender confusion at that age?

Boy, do I feel so sorry for that fucking circus freak. Transvestism in reverse?

She and all those morons I mentioned above were the assholes I encountered in North Korea.

Still, I don’t detest them.

They provided me with much “entertainment” and amusement.

But one thing you can be sure of is that this was definitely my last conducted tour with Singaporeans.

Unless I’m a real loser.