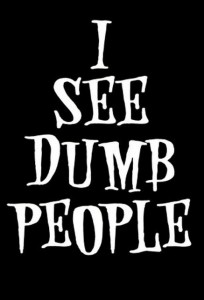 I was at Centrepoint on September 16 when two young women outside Guardian Pharmacy greeted me “hello” so loudly, with exaggerated cheerfulness and friendliness and in a manner that caused me to think that they were either my relatives or my ex-MBA students. Worse, they could be whores from Geylang who have decided to moonlight in daylight.

It turned out that they were raising funds for the Singapore Heart Foundation.

I found their approach deceptive, repulsive and too “in your face” and told them so.

One of them was like a fart in a phone booth – she refused to go away. She also revealed to me that she was only 18, doing this part-time and “studying psychology” somewhere – well, she certainly has lots to learn.

Hardworking as she may be, when I thought of her today, I am reminded of those teens who copulate without contraception, using Coke to rinse themselves after sex, that is, according to recent media reports.

How stupid can some girls get?

Hanging around outside Guardian Pharmacy screaming at strangers is hardly the way to communicate the mission of the Singapore Heart Foundation.

By the way, much has also been written about the difference in relational and communication styles between women and men and I don’t wish to add to the cacophony but most faux pas are committed by people who believe they know everything, that they can do no wrong.

For example, if your loved one has just launched a new enterprise would you skip town the day his business debuts?

If your husband is a chef and has just opened a new restaurant, would you plan a business trip on his opening night?

When someone dear to you tells you he’s not well, don’t you think you ought to show some concern by asking about him?

And if your loved one has to go away on business would you grab the opportunity to party with friends and go on trips of your own? What message are you sending him? That you couldn’t wait to escape his clutches? That he’s just another blip on your itinerary? Don’t you realize that all men suffer from separation anxiety since they were little boys? Neglect your man and you risk losing him!

I’m not surprised if such a thought has not even occurred to some supposedly, highly intelligent people.

Some people are just so insensitive, aren’t they?

Including some who think they are smarter than others; including those who claim they qualify for MENSA.

But if linearity is what you’re after, you’ll be disappointed.

Didn’t the Rev Dr Martin Luther King, Jr once said that “Nothing in all the world is more dangerous than sincere ignorance and conscientious stupidity”?

Another example – there is a place I go to for my cigars, a place where I’ve literally spent tens of thousands of dollars. There is a so-called Regional General Manager at that place, someone who knows me and who has even met me in Cuba when I visited earlier this year. Most people would expect retailers like her to acknowledge customers like us but often when I’m there she’s entertaining her own groups of friends and behaves as if all her customers are transparent.

What happened to their brains?

One other thing I’m beginning to be rather irked by is when they ask “Who else is coming?” every time I send out an invitation to a social event.

“Well, madam, the Queen of England and the Sultan of Brunei are both coming, good enough for you, bitch?” I’ve been tempted to reply.

As the host, it is my prerogative to invite anyone I want.