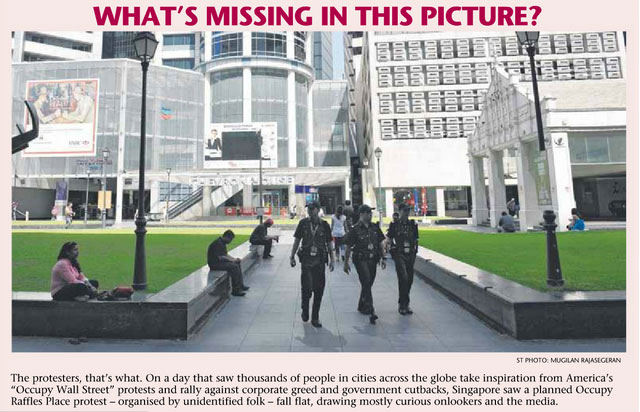 This was on the front page of yesterdays’ Sunday Times.

The headline was sarcastic and taunting.

So was the caption which said “The protestors, that’s what. On a day that saw thousands of people in cities across the globe take inspiration from America’s “Occupy Wall Street” protests and rally against corporate greed and government cutbacks, Singapore saw a planned Occupy Raffles Place protest – organised by unidentified folk – fall flat, drawing mostly curious onlookers and the media.”

Is that how journalists should behave?

In the book The Elements of Journalism, Bill Kovach and Tom Rosenstiel define ten elements of journalism.

They say that in order for journalists to fulfill their duty of providing people with the information, they need to be free and self-governing.

I read and re-read the ten elements with a fine-tooth comb – and a magnifying glass – but found nothing about sycophancy or using sarcasm to taunt citizens.

Those reporters at The Sunday Times must have read a different book.