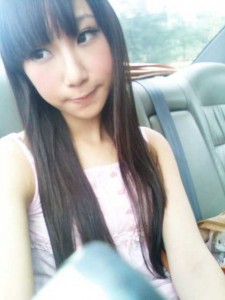 A pictorial dictionary is the best way to depict the meaning of words.

If I were to publish a pictorial dictionary, for the entry “scumbag” I would use Edison Chen’s photo.

Chen’s sex pictures with female celebrities went viral and led to a scandal in 2008. It’s hard to erase the scumbag’s horrifying hair raising harvest of hairy hooch from one’s memory.

The actor has become embroiled, once again, in a sex photo scandal – this time with a 16-year-old girl.

This time, he is seen kissing and hugging the young model Cammi Tse (above) in the leaked photos.

In one picture, Chen, 31, shown topless, grins at the camera while he presses Tse’s head against his.

One of his exes called the relationship “sick.”

Their steamy text messages, in which Chen begged Tse to bring uniforms and swimming suits when she came to his house, were also exposed.

Some of their leaked chats suggest that Chen had a sexual fetish involving uniforms.

You’ll recall Cecilia Cheung – who needed a Brazilian badly – looking stoned in a police uniform back in 2008, I’m sure.

In one chat, published as a screen grab, Chen asked to take pictures of Tse, promising to delete them later and exhorting her to keep them secret.

He told her he wanted to take photos of her in sexy costumes: “I get u the outfits… Sum cute… Sum sexy… Sum costume… Secret… can u keep??”

“It will b fun… some us together… some u alone.”

In a span of 10 minutes, he allegedly sent her 17 texts urging her to pose for pictures.

In another leaked excerpt urging her to pose in her school uniform, he wrote: “Rmb tmr to bring ur real school uni… N swimsuit… N cutecute clothing.”

When she agreed to his request, he responded: “Cant waitty.”

A female celebrity disclosed that the 31-year-old Chen has a craze for buying girls’ underwear on the Internet.