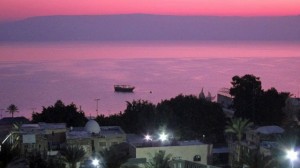 Sunrise at the Sea of Galilee, as seen from my hotel window.

Israel is nothing more than the world’s largest tourist trap exploiting the religious and the vulnerable. I came to this conclusion after being persuaded to go with my wife on a church-led “pilgrimage” from December 4th to 15th.

Yes – “pilgrimage” indeed; just fork out four thousand bucks and you’re a pilgrim. And if you have extra money to throw, pay another four thousand bucks to fly business class. The gay scumbag who cheated me of 50k nearly 30 years ago was there too – I spotted him in The Olive Tree Hotel in Jerusalem.

And talking about hotels, despite the steep prices, hotels we were put in were all third rate and most times food was utterly horrendous. The Olive Tree Hotel in Jerusalem didn’t even have a minibar in guest rooms.

What was even more horrendous was the fact that most of the sites “pilgrims” were taken to were places where Jesus Christ might have been or could have been – yes, “might have” and “could have” – nothing definite. Most of the time, we were told, “This spot marks the place where Christ probably did this or that, we’re not exactly sure, but traditionally we think this is where it all happened, but that’s not important, the important thing is that you are here, blah, blah, blah.” Imagine, a country built on conjecture, a pilgrimage based on hearsay. Yet the vulnerable, the gullible, the spiritually hungry, all willingly fall victim to what must be the world’s largest scam and lap it all up, contributing billions of hard earned money and life savings to Israel’s coffers.

Let’s face it and let’s not mince words. Israel is a country full of unfriendly and ill-mannered people; the place is filthy and dusty, with garbage-strewn streets and lots of stray cats. And immigration procedures can drive the calmest and most patient among us nuts. Israel has also some of the rudest service staff in the world who while hankering after tourist dollars, have forgotten how to smile in the process. The sight of Moslems selling crucifixes and rosaries at Via Dolorosa is enough to make me shake my head in disgust.

Our guide was a loud, obnoxious, in-your-face control freak who had zero regard for the individuals in our group. His only focus was to brown nose the pastor who led our group of 30, plying him with special food and drinks at meal times. The guide showed zero respect for the rest of us and yelled at us most of the time – including two sickly old guys in our group, one of whom had to use a walking stick. Imagine paying four thousand bucks to be abused several times a day! Plus the guide obviously earned commissions from our purchases – several of us were aghast to realize that despite this being a “pilgrimage” we were taken to many shops and encouraged to make purchases, including visits to two diamond “factories.”

My wife considered this (her second trip) yet another spiritual experience for her, but for me it was the perfect illustration of crass exploitation of religion and the ultimate example in the selling of over-priced Dead Sea or olive oil-based cosmetic products, religious trinkets and other religious-themed kitsch at terribly, overly-inflated prices. My 12-day trip to Israel was also a sad and vulgar reminder of the various sects and religious organizations still in existence today and how they fight to get a piece of the pie. Ironic isn’t it? And they call this the Holy Land? There are no fewer than 17 Christian creeds present in Jerusalem – the Roman Catholics fighting with the Greeks, the Copts, the Ethiopians, the Syrians and the Armenians among others, most – in my humble opinion – led by assholes full of shit. A very uncouth Catholic priest at the Church of the Primacy of St Peter at Tabgha chased us away because he suddenly decided to conduct a service outdoors, at a garden in which we were receiving a briefing; Armenian priests at Bethlehem’s Church of Nativity actually shouted loudly at some pilgrims to “shut up” – yup, these parasites who have never done an honest day’s work in their lives acted as if they own the place and behaved like thugs.

The Bible said that when Christ entered Jerusalem, he wept. If Christ was to visit Israel today he would die of heartbreak.

Contemplating a trip to Israel? I don’t recommend it, unless you have a strong stomach lining or a high threshold of pain. Don’t go unless you are prepared to have your dreams collide with harsh reality. Before I went, I harbored positive illusions about the place, now I wonder if I should have said no to the trip. If I had, those positive images in my mind of Israel would not have been shattered.