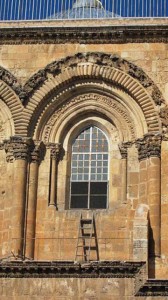 The immovable ladder at the Church of the Holy Sepulchre in Jerusalem is symbolic of the schisms in Christendom.

There are no fewer than 17 Christian creeds present in Israel – the Roman Catholics fighting with the Greeks, the Copts, the Ethiopians, the Syrians and the Armenians among others.

And the Church of the Holy Sepulchre in Jerusalem is shared by no less than six denominations. The primary custodians are the Greek Orthodox, Armenian Apostolic and Roman Catholic churches, with lesser duties shared by the Coptic, Ethiopian and Syriac Orthodox churches. The entire church is carefully divided into sections, some being commonly shared while others belonging strictly to a particular sect. Complicated rules govern the transit rights of the other groups through each particular section on any given day.

The famous ladder is a silly outcome of this religious stubbornness pushed to extremes. Sometime in the first half of the 19th century, someone has placed a ladder up against the wall of the church. No one is sure who he was, or more importantly, to which sect he belonged. The ladder remains there to this date. No one dares touch it, lest they disturb the status quo, and piss off the others. The exact date when ladder was placed is not known but the first evidence of it comes from 1852.

The ladder hasn’t moved since except for a brief moment by a prankster in 1977.

No one controls the main entrance of the church. In 1192, Saladin assigned responsibility for it to the Muslim Nuseibeh family. The Joudeh Al-Goudia family was entrusted as custodian to the keys of the Holy Sepulchre by the Ottomans few hundred years later, and both families still share the responsibility till this very day.

Over at the 1,500-year-old Church of Nativity at the Palestinian-controlled Bethlehem, the same thing is happening. The rotting roof has not been repaired for 500 years because the Catholic, Greek Orthodox and Armenian factions controlling it are afraid that if one of them fixes the roof, it will be in effect, declaring sovereignty at the expense of the other two. The result has been paralysis.

It took the Muslims to make things happen. The Palestinian Authority has stepped in to take the lead. After all, the Church of Nativity is the PLO’s top tourist attraction, with more than two million visitors a year. The renovation will cost US$15/- million and will be funded by the Palestinian Authority and international donors.