Fish Rots from the Head 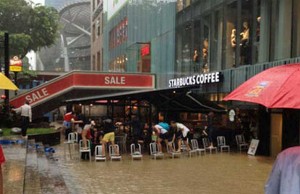 By now every mother’s son has said his two cents’ worth about the recent MRT failures.

There were lots of finger-pointing and gnashing of teeth.

This is my take of the whole she-bang:

The MRT saga – three disruptions in a week – happened because we as nation do not take the concept of accountability seriously enough.

When a known terrorist (who once hatched a plan for planes to fly into buildings in Singapore) was arrested and escaped, not only was the minister in charge allowed to go scot free, the little Napoleon was protected and forgiven by none other than BG Lee; yes, Baby God Lee himself who said something to the effect that it is not part of our culture to have top people resign to take responsibility. So little Napoleon continues to strut, and strut, and strut. PM Lee also said that we have to be careful of breeding a culture where people are afraid to make mistakes. Hey, there are honest mistakes and there are mistakes made because of negligence and incompetence!

So is this the message?  That if you are part of the establishment, you will be safe. No matter how fucked up you have been. No matter how negligent or incompetent you are?

And I laughed too when some retard went on TV and blamed the non-Chinese SMRT staff for breakdowns. Where on earth did we go to find cretins like that to be part of our government?

The claim that he was merely quoting somebody is overshadowed by his own patronizing statement that “we accept broken English.”

(In any case, he had to issue an apology later.)

This year we saw the PAP retaining power with the smallest margin of popular votes since 1965.

Has the PAP learned anything at all?

It is the perception of many that nothing has changed, really. And one’s perception is one’s reality.

And talking about reality, do you know that we now don’t have floods anymore? We have “ponding” instead. If you’re looking for a classic example of denial, this must be it. “No floods in Orchard Rd, just ‘ponding’: PUB” was the headlines greeting us on Christmas eve.

(By the same token, we don’t have casinos at all, only “integrated resorts.”)

Let’s face it: Liat Towers’ S$250,000/- flood barrier system didn’t work on December 23 (see picture above) and let’s face it, another retard is going to come out from some shit hole and say one more time that this happens only once in 50 years and the PUB head’s head will still stay put snugly on his shoulders.

Come on, Singapore, it’s time for heads to roll.

Let’s get serious before the mainland Chinese eat our lunch and the Indians from India continue to shit on our heads. By the way, do you know that Changi Business Park is now jokingly referred to as “Chennai Business Park”? Let me tell you – in the end, the joke’s going to be on us. When the Chinese and the Indians over run our land and make us strangers in our own country, we won’t be the ones laughing, ok?

On Christmas day I attended a wedding lunch at the Intercontinental. The invitation card clearly said “Dress code: Formal” but newly-elected/first-time MP ex-Brigadier General – yes, another BG – Tan Chuan-Jin (who by himself will never ever get elected, if not for the GRC system) was there as a guest, dressed rather too casually in an open-neck short sleeve shirt that wasn’t even tucked into his pants. Where did he think he was going? Visiting his neighborhood FairPrice supermart?

To a simpleton like me this is the epitome of the rot I see all around us – powers-that-be, arrogant and almighty assholes, boorish like hell and believing they can do no wrong, treating the rest of us like doormats, doing whatever it is they want and answerable to no one in particular.

Enough is enough. I, for one, am outraged.

Our train system is a mess, floods continue to happen despite all the measures taken, our taxi situation is a bloody joke, and the COE system is a dismal failure.

The morons at the top talk a good talk, but when it comes to delivery, it’s quite something else.

It’s time we all wake up.

Why do we continue to allow those with unquestioned power to remain on the throne?

Let the recent MRT saga and the “ponding” in Orchard Road be the death knell for a government that we are becoming increasingly ashamed of.

We must elect into government honorable men and women who are upright enough not only to admit their mistakes but also to pay for them, not fat cats with multi-million-dollar salaries who talk big but cannot deliver shit.

Let a few heads roll and let’s see if we’ll have another MRT failure or another “ponding.”

Let a few heads roll and I guarantee you – trains will run smoothly and there will be no more floods.