Abalones and rabbit fish are among the delicacies eaten during the Chinese new year period.

They are expensive. In fact, the police has warned retailers that “cans of abalone should be kept in locked display shelves, which are only accessible by staff and monitored by CCTV cameras.”

“Abalone” in Chinese sounds like “guaranteed to have surplus” so the mollusk becomes a “must-eat” food during Chinese new year. I don’t care if “abalone” is homophone for “baloney” but I like eating abalones. 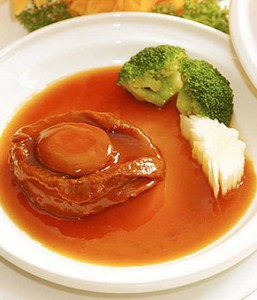 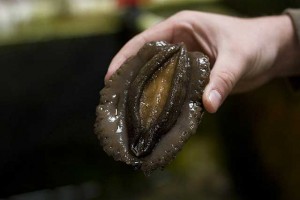 Here’s a very naughty mock ad making fun of that douche bag Edison Chen plugging Gillian Chung’s abalone, calling it “Number one abalone.” If you have been following the continuing scandal and understand Chinese, you’ll be able to read a lot more into the suggestive words. 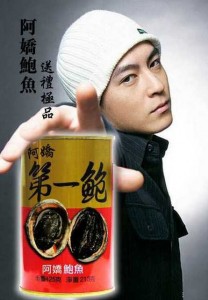 We often hear retailers or restaurateurs speaking of abalones in terms of number of heads. Number of heads refers to the size of the abalone. One head is considered the biggest. “Restaurant standard” is about 200 to 220g per head. Abalones in restaurants range from two to up to 16 heads. The bigger the number, the smaller the abalone. An abalone from a can is about 1.5 head although this year we’ve seen a proliferation of canned “baby” abalones. Another way of looking at it is this:  a four-head abalone means it takes four pieces of similar size abalone to make one Chinese “jin” ‘ (500g) or 125g each so a five-head abalone means it weights 100g.

Confused? Me too, I just remember the bigger the number the smaller the abalone.

My favorite abalones however are the dried ones. It takes a long time to prepare and hours to braise. If your girlfriends cooks them for you, take it from me – this one’s a keeper. 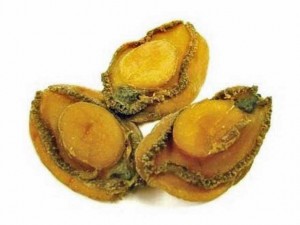 My next best alternative is the canned Calmex abalone from Mexico. To many canned abalone connoisseurs this is the only brand they will eat. It is a brand that has been around since I was a kid. 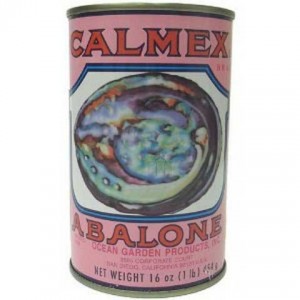 But because it is so expensive – this year it retails for S$195/- a can – all kinds of other brands have surfaced, but be careful what you’re buying because if someone sells you two cans of abalone for 45 bucks, there’s got to be a catch somewhere – you might be buying tiny abalones that are a bloody waste of time.

I’ll be very careful if you’re buying anything other than Calmex. 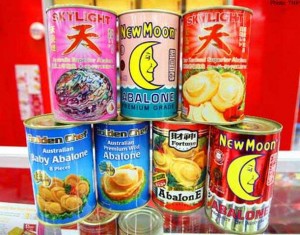