No Delay Ma, Where Got Delay? 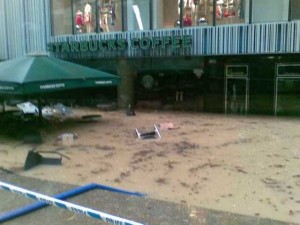 What flood? Where got flood? No, lah, it's latte from Starbucks lah.

A Chinese paper broke the news on January 24 and the government issued a statement later in the same day. Official word has it that the government was going to release the news on January 25; unofficial word has it that because the Chinese paper beat the-powers-that-be to it, the government had no choice but to release the news a day earlier. This is not the first time, The Straits Times, the self-proclaimed “the gold standard in journalism” has been scooped. The recent online prostitution case is the latest example. Imagine, The Straits Times had to report on what the Chinese paper first reported on. Someone should tell The Straits Times editor that that is not news, reporting on something others had first mentioned is called history, not news.

Arrests were made on December 19 and January 4 but the official announcement was on January 24.

Yet, The Straits Times on its front page yesterday said “There was ‘no delay’ in releasing news of the Corrupt Practices Investigation Bureau probe, he [Deputy Prime Minister and Minister for Home Affairs, Teo Chee Hian] told Parliament.”

Now, I know I’ve failed Mathematics since primary four, and my English is not all that great, but the arrests were made on December 19 and January 4 – yes, yes, I am saying it for the third time here – but the official announcement was on January 24.

No delay huh? I did a count – from December 19 to January 24, I counted a total of 37 days inclusive. I may be dyslexic but I think I can still count. (There are three kinds of people in this world, those who can count and those who can’t.)

Nevermind if you didn’t get that. Sorry I digressed.

Anyway, I’m confused. (No, I’m not related to Confucius.) Well, I guess it is hard to argue with geniuses who were scholars and who studied in Harvard. Ok lah, if you say no delay, no delay lor. You are the boss what.

This is an amazing country.

Floods happen all the time and we were told it only happens once in fifty years.

When they happened again, we were told it was just “ponding.”

We were also given the impression that there are no casinos – only “integrated resorts.”

Question: Do you know what “denial” is?

Oh yes, before I forget, they also tell us this is a “democracy.”