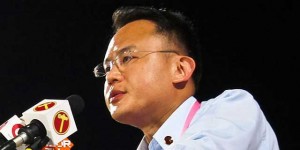 All that for a few lousy pussies?

Mr Yaw Shing Leong, let me put it to you without mincing words: Be a man, grow some testicles, come clean and face the music, will you? Do a John Edwards/Bill Clinton/Anthony Weiner/Eliot Spitzer and you can still move on. I for one, have already forgiven you. Let him who is without sin cast the first stone so go and sin no more! Mr Yaw, I was told you are a churchgoer, if so, then you should be familiar with The Pericope de Adultera.

So no need to run away. No need to disappear from the face of the earth. No need to do a “nut screws and bolts” lah. Well, you may have valid reasons for doing a Houdini and if that’s the case, then explain yourself; you can’t expect anyone to understand you if you don’t explain or express yourself.

Sad that some men have dicks but absolutely no balls!

These are the cowards who give the rest of us men a bad name.