Escape from the Escape Chapel Party!

The Escape Chapel Party, described as a “sacrilegious night of partying” scheduled to be held tonight right inside the chapel at Chijmes has been cancelled.

The decision was made after Watabe Wedding, a tenant at Chijmes that has leased the venue to Creative Insurgence, the party organizer, met the building’s management in a closed-door meeting Tuesday night.

It is believed that the meeting was called after Perennial Retail Management, the landlord for Chijmes issued an ultimatum to sue Watabe if it did not pull the plug on the party.

In a statement on Tuesday night, Aaghir Yadav from Creative Insurgence said the party will be cancelled “despite our best intentions to move forward.”

“Best intentions to move forward”? I leave it to you to analyze what that means and the attitude behind those words. By the way, Aaghir Yadav was once referred to as “Singapore’s Mr Buttcheeks.” He used to sell bikinis. His store was called – what else? – Buttcheeks. Sorry, no prize for getting that right.

Despite the cancellation, police investigation is continuing. A Ministry of Home Affairs statement says “While organizers can be creative in organizing events, there is no excuse for breaking the law, or for insulting or denigrating any racial group or religion in Singapore.”

Earlier this week, Perennial had said it strongly disapproved of the hosting of any event at Chijmes that was “illegal and immoral”, or “disrespectful of religions, faiths and races.”

Posters featuring women in nun costumes were used to publicize the event at Chijmes, which used to be a convent, the Convent of the Holy Infant Jesus – commonly referred to as CHIJ in the past – to be precise, hence the name “Chijmes.”

One version of the poster had a woman dressed partially in a nun’s habit, but with a party dress. Another showed a model in a black leather catsuit holding a rosary.

The first thought that came to my mind when I read about this was “Why would anyone give the go-ahead to something in such atrociously bad taste?”

But that’s not all, some stunted-looking insurgent-like young women creatively dressed as nuns were also seen around town promoting the event.

NOTE: This post is not meant to insult or denigrate any racial group or religion and if you are easily offended, please do not scroll down. There are pictures which you may find disturbing. 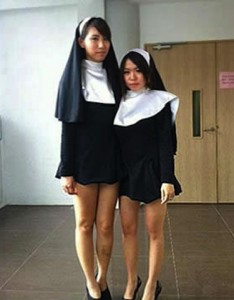 An image allegedly shared by Aaghir Yadav, with the intent of promoting the event.

Among those who had called for the party to be cancelled was Archbishop Nicholas Chia, who heads the Catholic Church in Singapore.

“Such an event is scandalous to the Church, and should not be held in the chapel,” he was quoted as saying.

However Aaghir Yadav said the event is “secular” in nature.

He was quoted saying “We would like to clarify that the images contained no religious symbolism…This also applied to teasers that said nuns will be at the party – we meant the secularized, costume version that contains no religious symbolism. However, in light of these sensitivities we will not be doing this as well,” he added.

To which a Netizen responded “Wonder if he likes it if we go to his Hindu temple and make a party there, get models to dress up like their priests in revealing attire.”

Yup cretins like Aaghir Yadav should seriously consider a career with Cirque du Soleil – as a clown.

But to his credit, the bikini salesman met and apologized to the head of the Catholic church Wednesday and gave the assurance that “such an incident will never happen again” and the archbishop accepted the apology and forgave him just as any archbishop would do, Catholic or otherwise.

Indeed, many people, even those outside the Catholic faith, felt the photos were offensive and insensitive.

For Catholics and Protestants, this period is of great spiritual significance. This has been Holy Week, the last week of Lent and the week before Easter. It includes the religious days of Palm Sunday, Maundy Thursday (Holy Thursday), Good Friday, and Holy Saturday.

Easter Sunday (tomorrow), which immediately follows Holy Week, is the great feast day and apogee of the Christian liturgical year: on this day the Resurrection of Jesus Christ is celebrated. It is the first day of the new season of the Great Fifty Days, or Eastertide, which runs from Easter Sunday to Pentecost Sunday.

One would have thought that being a multi-cultural, multi-religious country; there would be organizations that would be sensitive to the sentiments of people of various religious faiths. 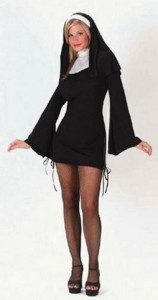 Not a good habit to get into.

Of course, there are many who think that Catholics and Christians are making a mountain out of a molehill. After all, the last religious service was held in the old chapel in November 1983.

I’m sure these sleazeballs, these luddites, these shit-for-brains among us would have no qualms holding some wild party during Thaipusam or Hari Raya with posters like this: 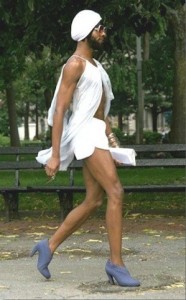