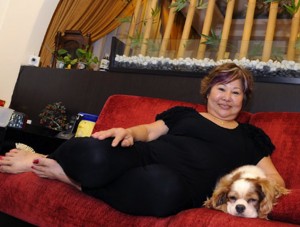 No, not Heston Blumenthal's Fat Duck and definitely not a hardship case.

Life is full of contradictions. There are people who are up to their eyeballs in debt but are renting apartments for mistresses. They are people who can’t even pay their credit card bills but are purchasing jewelry and going on luxury cruises.

I can only shake my head and sigh.

Indeed life is full of contradictions and irony and paradoxes reign.

Originally, such licenses were issued to hardship cases, so that the disadvantaged of our society who live below the poverty line can eke out a living cooking and selling food. Rental of stalls at hawker centers and markets were also priced low. They still are.

Over time people who are looking to get rich quick are known to pay hundreds of thousands of dollars to “take over” such licenses when the original holders of these licenses are making good profits and are now overcome with greed and eager to cash in on their goldmine. Channel NewsAsia reported in November 2011 that at least four stalls at a hawker center have changed hands for fees ranging between S$250,000/- and S$300,000/-.

(I’m not even mentioning those hawkers who do so well their heads have swollen to larger than the size of their woks, whose attitudes and behaviors – mostly rude and detestable – are so obnoxious nobody should patronize them, really. But that’s another story. Today’s rant is about contradictions, irony, paradoxes and greed.)

And talking about greed, the latest example must be that couple who run Kay Lee Roast Meat Joint, an eatery selling roast duck and pork. The wife (that’s her in the picture above) drives a Mercedes-Benz and they live in a freehold bungalow “with expensive koi frolicking in a garden pond.”

So far, the offer has attracted a few bids but none has yet hit the required S$3.5 million mark. “To be honest, we won’t be accepting any cheques for less than S$3.5 million,” the wife was quoted as saying.

Funny how, at the whiff of big bucks, suddenly everyone seems to be suffering from logorrhea.

Anyway investment advisors and anyone with brains will baulk at the price. After all, even if the daily profit – a figure which seems to vary with each news report – of S$900/- a day is maintained, it would take something like 10 years to break even on the S$3.5 million package. Yup, that’s just to break even.

The fact that the offer has actually attracted bids is indicative of the fact that there is no lack of suckers around. And greedy clueless suckers at that. What else is new? Obviously lots of idiots out there seem to think that all they need to do is to sell roast meat and they’ll become very rich and look like contented beached whales and frolic with koi.

(Just because you have the recipe doesn’t mean you can produce anything similar, and don’t forget other factors at play.)

I, for one, am proud of myself for being able to see through ruses.