Stingy People will Always be Poor 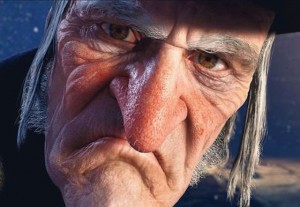 Ebenezer Scrooge is alive and well in Singapore.

I know a few misers who drive cars that cost hundreds of thousands of dollars but would park where parking charges are cheaper and walk half a mile in the sweltering heat to their destinations just to save a few lousy bucks.

I know of a couple of tightwads who would hold their bowels until they reach their offices to use the toilets there so as “to save water and toilet papers” at home.

When I worked for a HR consultancy many years ago, the managing director would even pilfer cans of Coke and tea bags from the pantry. We knew because sometimes tea bags would be falling out of his bulging pockets leaving behind a tell-tale trail from the pantry to his office.

And talking of tea bags, I once met a cougar who would re-cycle a tea bag several times. There was always a used tea bag secreted away somewhere in a drawer of her desk.

I came across a blog post recently about a Customer Service Officer at one particular MRT Station who would report to work much earlier before his official reporting time. Why? This stingy bugger who “doesn’t take his showers at home” uses the shower facilities in the toilets at the station.

For good measure, this Scrooge cycles to work from his home nearby. “He has the most ugly and ‘langgar tiang’ bicycle that no one will look at, let alone steal. But with a front basket, it serves its purpose. The langgar bicycle not only provides him free transport to work but also carries two big containers of freshly boiled drinking water from the hot water dispenser in the station’s pantry.”

Even on his off days he would make his way to the station to shower and to bring home water from the water dispenser.

He sometimes cooks using the station’s microwave and brings the food home for dinner. He would also bring home newspapers discarded by passengers to sell to the rag-and-bone man.

He also reminds me of another freeloader who knows the price of everything but the value of nothing. This scumbag would visit 10 to 20 shops to compare prices before making a purchase, not realizing that his time is worth more than the meager savings and that he is damaging relationships along the way.

Why are some people so bloody stingy?

German researchers once took samples of cells from inside the mouths of 101 young men and women and tested them for a gene called COMT.

The gene, which comes in “G” and “A” versions, is known to influence brain chemistry and the researchers believed it may do so in a way that affects how generous – or not – we are towards others.

The volunteers were given a gambling computer game to play and then told they could donate some or all of their winnings to a poor child in Peru.

To tug their heartstrings, they were shown a picture of a girl called Lina and a bracelet that she had knitted.

More than 20% of those with the “G” version gave all the cash they had won to Lina, but fewer than 2% with the “A” version were as generous.

On average, those with the “A” version, or the “mean gene” gave less than half as much to charity, the University of Bonn study found.

Reminds me of a really mean bastard who would wipe his dick on his girlfriend’s curtain as he leaves for home after a good time with her.

But jerks and tightwads can’t entirely blame their DNA.

Previous research has shown that our propensity towards generosity is only partly explained by our genes.

This means that other factors, such as upbringing, education, religion, etc also play a role.

A person may be motivated to become a skinflint and a penny-pincher because of past experiences of poverty, privation and insecurity. If certain individuals were brought up poor and needy they may grow up to become stingy because they have a fear of poverty returning again in their lives. Stingy people resort to greediness and even petty theft to feel safe the same way hamsters hoard food in their cheek pouches.

But it’s a vicious cycle.

People who are stingy may make some small gains. They may avoid loss or temporarily have an easier time than others. They may think they are beating the system and have the upper hand but in the long run they actually become poorer. Many will dislike them. They will be social outcasts, alienated by others. They may not be able to express themselves fully. They may live a limited life never realizing their full potential. They will never experience the pleasure of dishing out tens of thousands of dollars for a Singapore Airlines A380 Suite, or the luxury of being chauffeured in a Rolls-Royce or what it means to sip a three-thousand-dollar cognac or how it is like to taste truffles or caviar or to savor a thousand-dollar sushi meal. On their deathbeds, they will regret not having another bowl of that laksa because it would have cost an additional three bucks.

If you are stingy to the world and others you will receive the same stinginess back or more in other mysterious forms. What goes around comes around.

The blogger said that the Customer Service Officer at the MRT station has served 23 years and has just turned 55 and was bragging about the $171,000/- cash payout from his CPF.

The blogger also said that this person “would never squander away his CPF withdrawal or his own savings.”

In other words, as far as I’m concerned, this shithead will continue to remain poor in every sense of the word.

What a pathetic, parasitic loser!

Whenever friends ask me how much I intend to leave behind when I die, I always say “Same as John D Rockefeller.”

The world’s richest man left EVERYTHING behind.

Yes, you can never take it with you.

For this reason, I would rather die broke.

Those shitheads who have no frigging idea what I’m talking about but are quick to pass judgment, please save yourself the embarrassment and read this book: