Grin and Bear it 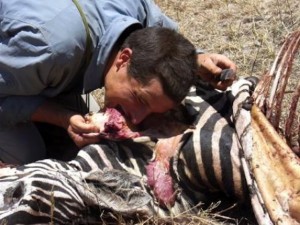 The Discovery Channel’s statement in March was blunt, perhaps even a touch bitter: ”Due to a continuing contractual dispute with Bear Grylls, Discovery has terminated all current productions with him.”

In my opinion, Grylls appears to be nothing more than an attention-seeking bullshit artist and a so-so actor who probably had a very bad childhood. Squeezing elephant dung for water to drink? Eating dead zebras? He’s so full of bovine excrement!

Come on, give me a break. And thanks for the tips, I’m sure a day will come when I have to eat a dead zebra raw.

Do I use chopsticks? Should I pack soy sauce? Or would wasabi be better? How about French mustard?

Let’s not forget his program’s fine print, which states:

“Bear Grylls and the crew receive support when they are in potentially life threatening situations, as required by health and safety regulations. On some occasions, situations are presented to Bear so he can demonstrate survival techniques.”

Bear Grylls is like a braggart of a bitch I know who claims to be able to do anything and everything – from singing soprano in a choir to pole-dancing to playing the guitar to being a member of La Confrérie de la Chaîne des Rôtisseurs – an organization with some of the most boorish and pretentious assholes I’ve ever had the misfortune to meet in my entire life – to being a certified event-planner and a world-class chef but has YET to demonstrate any of these abilities as far as I’m concerned. Indeed, dump Bear Grylls in our nature reserve and he’ll probably freak out. Sans script, sans camera crew, sans a whole entourage of behind-the-scene supporting cast, this poseur probably never be able to find his way to MacRitchie Reservoir or to know the difference between his ass and a hole in the ground. As a matter of fact, if he likes acting so much, I’ll advise him to go to Bollywood. Clowns are needed in every Indian movie.

Sigh; with every dead Steve Irwin, another retard would gladly step into his shoes. They’re all on TV molesting the natural habitats of nature’s creatures, while making bloody fools of themselves.

But do you realize that we who watch these programs are the bigger fools?

Such programs – including mixed martial arts – should be banned!

No way can mixed martial arts be considered a sport. If you consider mixed martial arts a sport, then you’ll probably consider Damien Hirst’s bullshit art. (If you consider Damine Hirst’s bovine scatology “art” you’ll probably hold up STOMP as a sterling example of what journalism ought to be.) If shark fin is already banned in so many places why not ban this brutal “human cockfights”?

After all, in addition to shark fin, do you know that since the turn of the millennium, wearing fragrance in public places such as hospitals, libraries, classrooms, courts and buses has been banned in a number of cities in Canada and the US?