You Are the Apple of My Eye 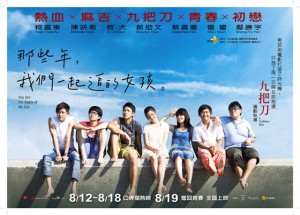 You Are the Apple of My Eye is a 2011 Taiwanese romance film based on the semi-autobiographical novel of the same name by Taiwanese author Giddens Ko who also made his directorial debut when he directed this film.

You Are the Apple of My Eye made its world premiere at the 13th Taipei Film Festival on June 25, 2011 and was subsequently released in Taiwanese cinemas on August 19, 2011. The film was well received by film critics, and it also set many box office records in Taiwan, Hong Kong and Singaporean box offices.

In Singapore, the weekend it was released, You Are the Apple of My Eye earned a total of SGD$675,000/- making it the second highest-grossing film in Singapore that weekend. It went on to gross over S$2.8 million, making it Singapore’s top grossing Asian film of 2011.

It follows the lives of seven high school classmates.

The star, 20-year-old Ko Chen-tung thoroughly deserves his 2012 Golden Horse nomination for Best Newcomer. The female star reminds me of someone I know.

The Hollywood Reporter described the film as a “larky retro coming-of-age confection” and praised the film, saying that it “injects a fresh, tart edge to the genre with a constantly self-mocking boys’ angle”, which the reviewer described as an “alternative to Asian teen movies that tend to be syrupy.” It added, “The youthful cast has a limited register but offer enough self-conscious blasé posing.”

The thrills, rivalries and heartbreak associated with high school romance are well depicted with nostalgia and humor.

The last scene – totally unexpected – had even a jaded movie buff like me – notice all my blog posts are categorized under movie titles? – in tears. I noticed that the person sitting next to me was also crying away.

The last scene alone is reason enough to watch the movie.

You Are the Apple of My Eye is a “must watch” film!