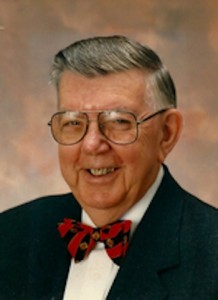 James H Goodsell, known as “The Bowtieman,” husband of Sally D Goodsell, passed away on April 12 at the age of 89. Son of Madeline V (Garrity) Goodsell and James M Goodsell, Jim grew up in the Hartford/West Hartford area of Connecticut. He attended local elementary schools and Saint Thomas Seminary in Bloomfield, Connecticut, and the University of Connecticut in Storrs.

Jim enlisted in the US Army, Infantry at the start of WWII as a private. He was commissioned as a lieutenant and served in France during the war, and in Nuremberg, Germany after its end. His duties were in the security area, including the prison and interrogation areas of the War Crimes trials. He made the Army a career, served in Japan during the Korean War and was a captain when he resigned his commission in 1952.

In civilian life, Jim worked in sales, in charge of the New York sales and promotion office for Better Homes and Gardens, New England sales representative for Doubleday, and Midwest sales manager for Macmillan’s Collier Books. Moving to Maine in 1966, Jim and his wife Sally operated Shaw’s Bookstore in Bath. Later he started Goodsell Church Goods Company, selling church furnishings and equipment throughout New England and the eastern provinces of Canada.

In 1994, Jim and Sally started manufacturing custom-made bow ties to order, the first bow tie business on the Internet. Know as Mainebows, the business grew until it had customers across the world. Each bow tie was painstakingly and lovingly sewn by hand. This was when I became a customer and a friend. We would emailed each other and exchanged views about life in general. Jim impressed me as a very knowledgeable yet humble man with a great sense of humor. Mainebows was later sold to Linda Robertson, a seamstress who had been with Mainebows since the very beginning. The company is still an active business today. (Over the years, I have purchased bow ties from several sites, but with Mainebows, there’s an unbeatable personal touch that no other company has been able to replicate thus far.)

Jim served as a director of the Bath Area Chamber of Commerce and the United Fund. He was a trustee of the Wiscasset Public Library, and served for two terms as Senior Warden of Saint Phillip’s Church in Wiscasset. He was also a member of the Elks Lodge #1008 in Rockland.

He is survived by his wife and business partner, Sally of Nobleboro; son, Phillip and wife Sandra of Wethersfield, Connecticut; daughter, Diane and husband Marv of Storrs, Connecticut; four grandchildren; and seven great-grandchildren, all living in Connecticut.