How Many Wrecked Lives Behind the S$288 Million Collected? 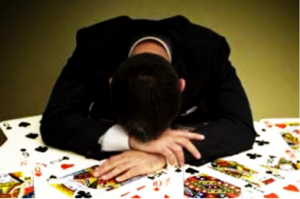 Singaporeans and permanent residents paid a total of S$288 million in casino levies in 2011 and the first six months of this year.

Singaporeans and PRs must pay a 100-dollar levy each time they visit.

Most times the results are disastrous.

We only have to look at what’s happening to Indians or Native Americans and their reservations where casinos are allowed to operate to see how the future of these people – and the non Native Americans who visit these casinos –  have been sold to the devil. (Because these reservations have tribal sovereignty, states have limited ability to forbid gambling there, so these Native Americans open casinos.)

But money is a big draw.

To me, other reasons for allowing casinos are merely poor excuses.

Job creation is one such excuse.

Recently Bloomberg reported, “Of the 122,600 jobs created in Singapore last year, about 70 percent, or 84,800 positions, went to foreigners.”

Today, the quantity of money passing through Macau exceeds that of Las Vegas five times over.

Steve Wynn, the man behind Las Vegas, whose personal net worth is estimated to be US$2.3 billion makes more than two-thirds of his global profits in Macau.

In 2010, high rollers in Macau wagered about six hundred billion US dollars, roughly the amount of cash withdrawals from all the ATMS in USA in a year.

Sandy Adelson, the man behind Sands, built casinos in Macau too. The Sands Macau cost two hundred and sixty-five million US dollars to build.

Adelson recouped the amount within a year.

Among other social ills, gambling in Macau is accompanied by violent crimes.

At one time the cops there even assured tourists not to worry because hit men in Macau are so good they hardly miss!

Vegas was a desert outpost battered by sandstorms and flashfoods – a land that the “Lord had forgotten,” in the view of nineteenth-century missionaries, who abandoned it.

In the eighteen-sixties, Monaco was a tiny backwater in financial distress after losing most of its land to France; then it built a casino, and became one of the world’s wealthiest places.

Today, Singapore’s two casinos are doing better than the 42 in Las Vegas!

Many say that money is the root of all evil.

It’s the love and greed for money that’s the root of all evil.

Too many talking heads and big mouths have not done enough to prevent casinos from being built on our shores.

These include all the heads of the major religions represented here.

Have you all compromised your morals?

Well, the talking is over, the casinos are operating in full force now and Marina Bay Sands is fast replacing the Merlion as our national icon, not that the hermaphrodite Merlion is anything to be proud of really, but at least it is original and unique.

Isn’t that great? Ours must be the only country in the world with a casino as our national emblem or symbol. (If you don’t believe me, just do an online search on “Singapore” and see what picture shows up.)

Collectively, these people who talked and talked are jointly responsible – and should be held accountable – for wrecking lives.

How many wrecked lives are behind the S$288 million collected?

I know someone who has a store at Far East Plaza selling electrical goods. I used to see him to purchase my cell phones and other electronic paraphernalia like thumb drives, etc. Lately I see his store shuttled till around noon. When asked he told me that it has been his habit in the past year or so to go to the casino at Sands every night with the cash takings of the day. He would lose every single cent, then go to one of the ATMs there to withdraw the maximum amount allowed. He would lose that too, only then he’ll go home.

His employees have all left him. He runs his store alone now. But the late nights are taking a toll. He struggles to wake up in the morning and he has a problem opening his store at 10:30am as he used to.

I wonder how much longer can he go on like this.

Where are all those MPs who profess to be religious and morally upright when we need them?

Are they standing in the gap?

“And I sought for a man among them, that should build up the wall, and stand in the gap before me for the land, that I should not destroy it; but I found none.” (Ezekiel 22:30)

Does anyone know how hypocritical it is to call casinos “integrated resorts” and gambling “gaming”?

How many legs does a dog have if you call its tail a leg?

Four. Calling a tail a leg doesn’t make it a leg.

Calling yourself a religious leader doesn’t make you one.

Professing to be morally upright doesn’t mean you are.

There’s nothing resort-like as far as the two casinos are concerned.

If you refer to gambling as “gaming” you might as well call rape “sex education.”