In-N-Out Got it Right 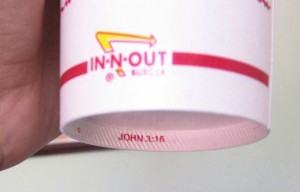 A line started forming at 9.30am with more than 300 people standing in a queue that snaked through Circular Road out to Boat Quay.

And in five minutes everything was sold out!

I’m not sure if it’s the same here in Singapore because I wasn’t one of those 300 idiots standing in line yesterday, but in the US, In-N-Out prints discreet references to Bible verses on their paper containers. These consist of the book, chapter, and number of the verse in small print on an inconspicuous area of the item. The practice began in the 1980s during Rich Snyder’s presidency, a reflection of the Christian beliefs held by the Snyder family.

In my opinion, the Snyder family has got it right – unlike those who claim that they are propagating their faith and reaching out to non-believers by diverting millions of donations solicited from the public to finance so-called crossover projects.