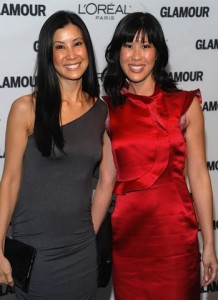 Let me say it once more.

Yes I have been to North Korea to check things out but I am no defender of that retarded chubby baby face Jabba the Hut lookalike with the bad haircut, an equally rotund wife – it was recently revealed (I detest fat women) – and all those trigger-happy old diabolical shitheads, cronies of his dad and granddad with all those fancy bottle caps on the front of their ill-fitting military jackets bulk purchased from some five-and-dime store.

Yet I don’t think much of Lisa and Laura Ling, both “journalists” from the US of A.

These shameless skanks are also involved in the increasingly popular sport of American journalists – that of Kim bashing.

Lisa once did a program – dripping with sarcasm – on North Korea for National Geographic that practically mocks the North Korea leaders to no end.

In March 2009, her younger sister, Laura and her colleague Euna Lee were detained by North Korea for illegal entry into the country and were sentenced to 12 years in a labor camp.

Did anyone ever wonder why? Honestly I think these bimbos, FUBAR (Fucked Up Beyond All Repair) were asking for it.

They’ve written a book about the experience and who knows a movie may be in the works. Anything to get attention huh?

If I were Kim Jong Il, I would have thrown away the key and tell Bill to fuck off.

The Ling sisters are a disgrace to Chinese people everywhere.

It’s a good thing I don’t know them personally. It’s the ONLY thing keeping me from going to jail for assault and battery.

Thanks, Jesse Winchester for the title of today’s blog post.