A Year Out of Oppression 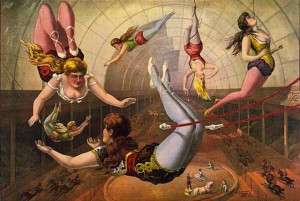 On this day one year ago, I walked out of the circus, or the zoo, as some would prefer to call it.

After ten years of indentured servitude, I left a cold-blooded, soulless organization filled with lots of lying, incompetent, heartless, political zombies more focused on their own self-interests than anyone else’s.

I left a bloated bureaucracy staffed largely by legions of retarded assholes who preach about building a smarter planet but in reality behave and talk like dimwits and morons.

Call me ungrateful but there’s really very little to be thankful for.

If I had not been independently wealthy I would probably end up being a bankrupt.

In the ten years I was jumping through hoops of fire most of my salary went to paying the difference for flying business class, the other half probably went to paying phone bills. The circus didn’t pay for anything but monkey class air travel unless you are deemed a “god” and my pay grade clearly designated me as “coolie” although I had fierce titles and I once covered 22 countries and traveled for work nearly every week. Do your math and you’ll see where my salary went. As for reimbursement procedures they are clearly designed to frustrate you. Having headhuntered to join them from the world of corner offices, multiple secretaries, chauffeured limousines and first-class travel, I found it hard to adapt and never really did.

But I tried. Of the batch who joined ten years ago, I lasted the longest. Others bailed out and pulled the plug a long time ago. Maybe I have a higher threshold of pain?

The friends I have from the circus I can count on the fingers of one hand – great souls like Charles and Tracy are about the only two that immediately come to mind. To name others I need to wrack my brains a bit.

But I’m glad I left.

I felt as though an elephant that had been squatting on my chest had finally sauntered off.

It’s a freedom that cannot be expressed using words.

In fact, every single day.

Today, I’m king of the hill, top of the heap.

It’s been a great year thus far as far as work is concerned.

Though I only work if something comes along that I absolutely cannot refuse.

Most days I take my time with the newspapers, meet friends for lunch, smoke my pipe, take a nap, read a potboiler, work on my books, go out for dinner, sip some wine or single malt, watch a movie, read my magazines, smoke a Cuban cigar or two…

Certain people continue to vex me.

Still too early to come to a conclusion as to how 2012 has been.

There’s five more months before the year is out.

Maybe my luck will change.

It’s just that they can get a lot better.