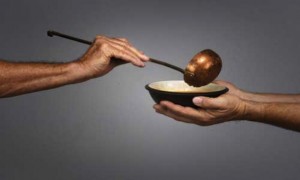 I couldn’t stop thinking about the new MacBook Pro with Retina display.

I went to Apple’s online store, clicked all the specifications I wanted and saw that the price came up to S$5216/-.

But I did not click “Check Out Now” because I remembered something a friend has just done.

He has decided to forgo buying a new MacBook Pro with Retina display and to use the money to finance the utility bills for an entire block of poor people living in public housing.

Products have so-called “planned obsolescence” built in, and I certainly don’t think my current MacBook Pro is old, but the itch to have the latest and the mental or perceived obsolescence in my mind continued to bother me until I remembered what my friend has done.

Tomorrow is our National Day.

The 47th National Day of our glorious nation.

However it is not necessarily glorious for every Singaporean.

BBC says that in Singapore there is no national poverty line.

That may be so, but I know for a fact that there are many families trying to make ends meet – the have-nots.

For the rest of the haves, this is indeed a glorious nation.

It is a glorious nation based on the following facts I’ve garnered from publicly available sources:

Singapore was the richest country per capita in the world in 2010 and will remain at the top even as far into the future as 2050, according to the Wealth Report 2012 by Knight Frank and Citi Private Bank. (Norway is second, and the US third.)

One in six households is a millionaire in investable wealth.

We are the third richest country in the world on a per capita basis.

We are among world’s wealthiest, ranking sixth highest in net wealth with a mean value of US$284,692 per adult.

Last year the number of millionaires (in US dollars) increased by 14%, one of the world’s fastest growth rates. In the previous year – from 2009 to 2010 – it went up by a record one-third.

Our wealth does not include the value of our properties or other fixed assets, if it does, we would be even richer.

Not a staggering amount to a lot of Singaporeans but consider this – a Jaguar XFR costs only about a hundred thousand Singapore dollars in the US. That’s the amount you’ll have to fork out for a Toyota Altis here.

Recently someone bought a bungalow for S$47.8 million.

Again that’s not an astonishing figure because if you own a 5-room HDB flat you could easily afford an island in Maine, a seaview villa in Spain, a stately mansion in Georgia or an island in the Caribbean.

Celebrity restaurants are not only packed – they are booked months ahead.

With North America in dire straits and Europe the reigning “sick man of the world” it is no wonder so-called celebrity and Michelin-star chefs are flocking here.

Keeping “good luck” fish each costing thousands of dollars appears to be a rather common hobby.

Expensive DSLR cameras are flying off the shelves like hot cakes.

Cigar “clubs” are flourishing and are packed every night. Young, still wet-behind-the-ear kids are smoking huge stogies that cost a hundred bucks a stick and turning green.

Someone reportedly paid 60,000 bucks recently just for flowers at her wedding.

An ugly plastic surgeon boasts about panty hoses that cost her thousands of dollars to buy.

A newspaper reported that every single day, 25 people had bought a Mercedes-Benz or a BMW, and a Ferrari every four days over a recent 11-month period.

Singapore’s 40 richest are collectively worth US$59.4 billion.

Millions were allegedly diverted from public donations to promote the showbiz career of a pastor’s wife.

But we are not all parasitic.

We work the longest hours in a worldwide comparison, beating the Japanese, but according to another study, Singapore has the second lowest job satisfaction in the world.

I always watch out for the word “but” – there’s always a “but” somewhere.

To be honest, this is the best of times but it’s also the worst of times for many.

Although the BBC says that in Singapore there is no national poverty line but according to this blog, there seems to be a lot of homeless people sleeping in public places.

There must be reasons for this dichotomy.

In response to a question raised in parliament in November last year, the Acting Minister for Community Development, Youth and Sports said that the help that the ministry provides ”typically cover the bottom 20th percentile of households, with the flexibility to go beyond if the family’s circumstances merit consideration.”

Based on a study published by the Department of Statistics in 2011, the average monthly household income, where at least one member was employed, for the bottom 10th percentile was S$1,581/-. That of those in the 11th to 20th percentile was S$3,135/-.

A US Census Bureau report said the lowest quintile of the population had an annual household income of less than US$20,000/- in 2010. That is comparable to Singapore’s numbers.

The US measures poverty using thresholds in dollar value – if a family’s income is less than its threshold, then everyone in that family would be considered “in poverty.”

Prime Minister Lee Hsien Loong said in an interview at the World Economic Forum in Davos recently that although it was “no fun” being poor in Singapore, people were still “less badly off” than the poor in other countries, including the US.

Whatever it is, I hope that this National Day, we not only spare a thought for the less fortunate, but actually lift a finger to help make life a bit easier for these poor folks.

To whom much is given, much is expected.

Remember Selina Kyle’s question in the latest Batman movie – “How could you live so large and leave so little for the rest of us”?

This is what I mean by lifting a finger to help.

The cost of a MacBook Pro with Retina display – a little over five thousand bucks – may not go very far, but I was told that for the needy residents in that block of public housing it did help alleviate their burden a little.

Of course, some may argue that it is more important to teach a person to fish than to throw him a fish. This is true, but how many of us are teaching people to fish? Sure, people ultimately have to help themselves but it is also important to do something to get the destitutes in our midst out of their valley of despair and not allow them to sink deeper by leaving them alone to indulge in self-pity or to simply wallowing in despondency.

In any case, let’s all chip in and do something. Let’s look for ways to help.

Let’s not do nothing just because we can’t do everything.

And when I say do something, I don’t mean this – click here to see how the authorities go about dealing with the homeless.

Yes do something indeed but I’m not talking about knee-jerk reactions.

Let’s not be wealthy materially but poor in spirit.

Let’s make this truly a glorious nation for all Singaporeans.