My Life in Ten Posts: Of Sore Balls and Unevenly-sized Testicles (Part 1) 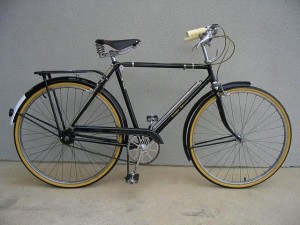 When mother felt the birth pangs, father jumped onto his boneshaker of a bicycle and peddled furiously for nearly two miles to my maternal grandfather’s house. Grandpa had a car and father wanted to borrow it so that mother could be driven to hospital to give birth.

Father still talks about that bicycle – those days bicycle tires were rock solid, there wasn’t any air in them and that two miles of peddling on uneven country road strewn with gravel was enough to almost cause permanent damage to his family jewels.

But I was born, screaming and kicking into this world.

The result of a courtship between a farmer’s son and the daughter of a wealthy grocer. Well, he had a car right?

My parents have always been proud of the fact that their union was the result of courtship, a relatively rare phenomenon in that era of matchmaking.

Father might have been the son of an illiterate farmer, a restless youth who took the slow boat to Singapore from impoverished Fujian and indentured himself as a coolie for years before he settled down to farm a barren land near Tuas, but father grew up during the Japanese occupation, started working at the tender age of nine, and was more political astute than many Singaporeans today.

The youth of those days were caught up in the frenzy of anti-Jap, anti-Brit sentiments and father participated, and paid his price. That was a part of his life he still refuses to talk about although conversations I had with various family friends and relatives have given me a pretty good idea of what happened.

My parents were loving parents; they doted on me, but they didn’t seem terribly smart those days, I’m afraid to say. Maybe it was because of an education that was interrupted by war and never resumed. As a young kid, I remember there was a short period of time when I was being dragged from one doctor to another when my parents noticed that one of my testicles was bigger than the other. Gosh, I often wonder didn’t my father ever check out his own balls?

But balls he had, he and my mother had audacious plans for me, his firstborn. I was brainwashed into thinking that I had to be a doctor when I grow up. This was a mantra so ingrained in me that I absolutely believed it. I recall at a primary school English oral exam, when an examiner asked about my ambition and I proudly declared, with puffed-up chest, that “I am going to be a doctor when I grow up” she rolled her eyes and very sarcastically replied, “Yes, I thought so.”

I didn’t become a doctor, at least not a medical one, although my profession requires me to do a lot of work in hospitals.

My academic performance in high school was dismal.

Getting into the local university was not an option. In my year, there were 1,800 places but 8,000 qualified applicants. The local u was only for the crème de la crème.

I went to work and spent years laboring away taking many more years than my successful contemporaries took to eventually earn some legitimate, credible and useable qualifications through part-time, off-campus and summer courses.

Eventually I got what I wanted but I did it the hard way.

But it was my way.