My Life in Ten Posts: Oh To Be Young Again (Part 2) 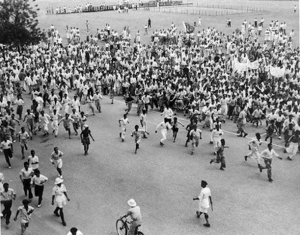 I was in primary one when racial riots broke out. The year was 1964.

If school was the bane of my existence, then that period of my life was more than made up for by the childhood I had.

I was plump and non athletic. But I had height. Teacher after teacher had wanted me to take advantage of my height and tried turning me into a sportsman and they have all failed.

But one “sport” I excelled in was Hantam Bola.

We played it before school, during recess and after school.

It’s a simple game – picture a field of boys and a ball; yes, one small ball. The game starts with somebody taking a small rubber ball the size of a tennis ball and hitting another person with it. When the ball ricochets off the victim’s body, the rest of us will try to grab the ball and whoever has the ball in hand would look for someone else to hit. We could hit anywhere – the body, the face, it was all fair game.

We were playing Hantam Bola since primary one. It may not qualify as a sport but it got us running, sweating, huffing and puffing and we always worked up a sweat before class; our school uniforms would be drenched and we would wait in anticipation for recess time when we would play Hantam Bola again. Yes it was that addictive. There may be race riots in the streets but we boys – Chinese, Malay, Indian – got along famously; we were already living the Singapore National Pledge two years before it was written!

Hantam Bola continued to be a part of our lives right up to secondary school, when more serious sports – like soccer and rugby – took over.

In any case, those days, the kampong spirit was vibrant and real.

Kids from the same neighborhood would be in the same school as me. The school – Tanjong Rhu Integrated Primary School – is long gone but the memory remains to this day. It was with great joy when I did some work for a client and met up with RL again. In primary school, RL was bright, pretty and as girls go, way more mature than anyone of us boys. Years later I was headhuntered to go work for the circus – a so-called globally integrated corporation – I was pleasantly surprised to meet RL at the lobby. She had by then also joined the same company. RL is happily married and has a couple of wonderful daughters. She was nominated to run for Member of Parliament position – “the posters have all being printed” – only to be sidelined at the very last minute to make way for a young controversial lass by the name of Tin Pei Ling, in the (misguided) belief that PAP would be able to better engage with younger constituents. Today RL is semi-retired and helps out with initiatives focusing on the betterment of the community.  The president has appointed RL a Justice of the Peace. At age 55, she’s still as pretty as a picture.

A couple of years ago, I reconnected with Lim Kim Peow, who works at NTU now, and met him a couple of times, once for dinner with our primary school teacher Vincent Chung. Kim Peow’s mum used to sell chicken wings at our neighborhood market. Over dinner, reminiscing about the past, we realized how far we’ve come since those childhood days.

I have no idea what exactly happened to Foo Toon Lee and his brothers. I remember when I was still in primary school, Toon Lee lost a brother to tuberculosis. Toon Lee has two other brothers, one of whom has the same Chinese name as me and through the grapevines, I hear he and his brothers are doing well but I have no details.

Still it’s comforting to know that they are fine.

That’s the thing – in this day and age it is easy to reconnect if one really makes an effort. And as long as the person is alive you know he or she is there. It’s a matter of reaching out. Often, I’m just too lazy to make an effort and a little afraid of being awkward with each other once the connection is made. Will there be much to talk about after decades of separation? Also, there may be cases when others would not appreciate your getting in touch with them, as some of my friends have experienced. Of course if someone has passed on, then there is no chance of ever meeting again. It’s so sad but death adds such a finality to things.

On the same floor lived another family – a son and three or four daughters. The son was a constant childhood playmate of mine, he was good in his studies, and very bright. All CW had to do was to pick up something for the first time to instantly become an expert. I saw how he mastered chess, and the harmonica just like that. CW won a scholarship to France and lived overseas for many years.  His sisters are all doing very well, from what I’ve heard, one of them is a professor at NUS.

His parents were another story.

Time after time, CW or one of his sisters would bang on the door of our house in the middle of the night, crying that their parents were fighting and asking my parents to intervene.

Those were not petty quarrels but rather fierce fights involving limbs and gnashing of teeth. Apparently it had to do with their dad having a woman outside. CW’s dad eventually moved out to live with “the other woman” and I heard that when he passed away, CW’s mum and the rest of his family didn’t even know about it until much later.

It’s interesting how things turn out. Only this year, I met a lady at a client’s. She was in fact a participant in one of my seminars and in a conversation about our childhood we discovered that we were neighbors living in the same block of flats when we were little kids.

Very few people from my childhood are part of my life today. The only two notable exceptions would be Asad Shiraz and Jimmy Chua Tin Chew.

Asad is doing well – he was CEO of our zoo at one time and now markets resorts and Jimmy is a diplomat with our foreign service. Both guys married wonderful wives; both are proud fathers of a daughter each.

As for the others I can only wish them well.

The world has gotten very small and I am hopeful our paths will cross again one day.