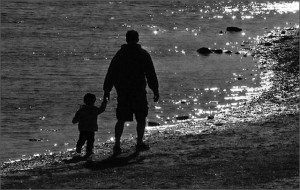 Moments with father were precious.

It was the year Alka Seltzer was introduced, the Star Spangled Banner officially becomes US national anthem, the first electric shaver went on sale, Little Orphan Annie was first broadcast (on radio) and the first Dracula movie made its debut.

When he turned 80, I wanted to organize a huge celebration.

I also believed that he was the word’s most generous man – when I was young I had several relatives living with us at our small house of two bedrooms. My father was kind enough to accommodate them. His two brothers (my third uncle and later my fourth uncle) took turns staying with us. Next, one of my mother’s brothers came to stay with us too and finally a relative of my father also came by and camped himself at our crowded house. At one time the joke was that our house was like a community center. I disagree on that point, I think with with all these fellows from the country side bunking in with us “town folks” for free board and lodging while they looked for jobs, our house was more like the Salvation Army.

When I was a callow 15, I learned nothing from my father, I was completely unteachable.

When I was 50, from my father I learned that even giants can succumb. I’m thankful that the heart attack he suffered then was a minor one and his cardiologist had to put in only one stent.

Today my father is still hale and hearty, with an enviable appetite and a penchant for all dishes containing lethal fat pork. My sis, who lives with my dad, would, out of exasperation WhatsApp me pictures of braised pork skin that my dad has cooked, asking me to talk to him about his diet!

In addition to his hearty appetite and love for unhealthy food, my father possesses an emotional intensity that can best be used to describe him as a highly opinionated, angry and – regrettably – somewhat bitter old man.

I think in his 80’s, he still has lots of unresolved anger. His temper would probably make some relatives think that he’s a bastard. But I believe his vehemence and vituperation is due to the goodness of his heart, not because he’s an asshole. Being old school, he’s no wimpy new age guy, he’s no modern dad, and he doesn’t really know how to show that he cares so he bitches and moans about the state of some relatives’ lives and the behavior of yet others – obviously behavior he disapproves of for one reason or another  – and he gets upset and he becomes livid.

I suspect that’s why he wants to keep this milestone 80th birthday of his under the radar.