My Life in Ten Posts: The Extended Family (Part 8) 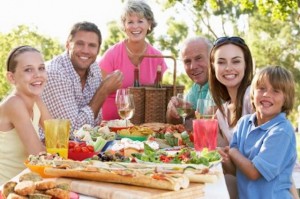 My idea of family.

Once, after I’ve delivered a speech a young man came up to me and asked “Do you know So-and-so Loh?”

I thought for a moment then replied, “I believe I do, he’s a distant relative of mine.”

“I’m his son,” the young man extended his hand.

Then he added, “You know my father lah” with an odd, almost apologetic expression on his face.

“Oh,” catching his drift, I quickly asked, “are you So-and-so’s second wife’s son?”

“No, I am his third wife’s son,” the young man clarified.

Not all of us galavant around populating the earth.

As a matter of fact, I can think of only two other relatives who have more than one wife.

And both are not even Lohs.

It is not for me to judge if people are right or wrong when they have more than one wife, especially relatives.

But that doesn’t mean you can’t criticize your relatives.  I may not judge but surely I can criticize. Offer some constructive feedback, as they say.

I have only one sibling – a sister born ten years after me. My father, however, has three brothers and eight sisters (including one sister who was given away) and my mother has five brothers and seven sisters (including a sister who was also given away) and all these siblings of my parents have children and some have grand children and if I want to criticize them, there’s a lot to criticize.

And usually it is those who are a little well off than the others whose behaviors and attitudes are really detestable and obnoxious.

Fortunately many of these people I meet only at funerals and weddings.

Some of my relatives are absolute douche bags. I wish we are all one big happy family but we are not – sure, among us are some decent folks but I believe the morons outnumber the civilized ones.

I used to joke that some relatives of mine are still alive because killing is a crime.

I give them a wide berth when I see some of them in public.

Once, some of them even “reported” to my father that I have been spotted along Orchard Road with various girls.

“And what’s the problem with that?” I asked.

End of any more such reports.

And because many of them see Yin for dental treatment Yin actually sees them more than I do.

Say what you want, these are folks with rather old school mentality – to them ties and especially blood ties, are very significant and important – many of them can’t imagine consulting another dentist the moment they knew that I have married a dental surgeon.

To do so would mean not giving me face.

Such gestures are unfortunately lost among many others today, but with my relatives – and some friends – loyalty is of utmost importance. They would simply not visit another dental surgeon because my wife is one. Even those living overseas fly in to see her for dental treatment.

Thankfully those who see Yin are mostly the nicer, humbler ones.

I guess it’s hard to be an asshole while seated in a dental chair, with a whirring drill hovering over your head, and impending pain looming over the horizon.

But jokes aside, I think it is also due to Yin’s competence as a dental health care professional that they would rather see her for treatment than anyone else.

Many members of my extended family are still alive and many of their offsprings read this blog therefore, out of respect, I am forced to be circumspect.

This is somewhat unfortunate because I pride myself as a “take-no-prisoners, no-one-is-spared” kind of a blogger.

But I guess, for the sake of peace and harmony I have to hold some of my comments about some of my relatives until they croak.

(By then, my full-blown, uncensored memoir with all the sordid details – and photos – will be out.)

That is, if I don’t beat them to the grave.