I’m in Manila now, having been here since August 21. I’ll be leaving this afternoon to fly back to Singapore.

I’ve been using the Samsung Galaxy SIII cellphone while in Manila.

My client has put me up at the Dusit Thani hotel in Makati.

I used the WiFi when I was in my room to surf, to WhatsApp and to do my emails.

One evening, when I looked at my Samsung Galaxy SIII, I saw that listed in the phone’s Gallery were albums containing pictures from the PCs of other hotel guests: 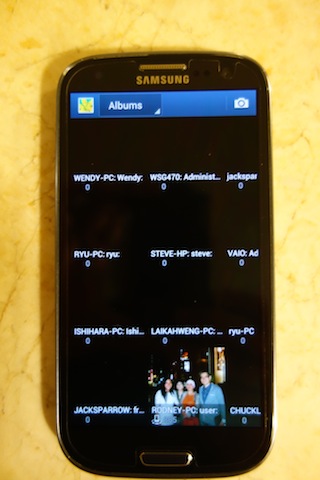 I clicked on one labeled “Rodney-PC: user:” (the album in the middle on the last row in the photo above) and I could see all the photographs in this person’s PC – there were pictures of birthday celebrations, pets, vacation photographs, some rowdy partying at night spots, even a photograph of Goh Chok Tong at an event. All the nearly 900 photographs in his PC – his entire collection – were accessible to me. Not only that, I could download them all into my own phone if I wanted to.

This person has the habit of taking pictures of calling cards he collected and I could see every single calling card in detail, including one calling card of a Tan Wen Ru, HQ Executive (Finance & Admin), People’s Action Party (HQ), complete with address, email, contact numbers, etc.

I am no sleuth but I presume this Rodney is a hotel guest from Singapore.

Here’s a picture of the album labeled “Rodney-PC: user:” showing his collection of calling cards: 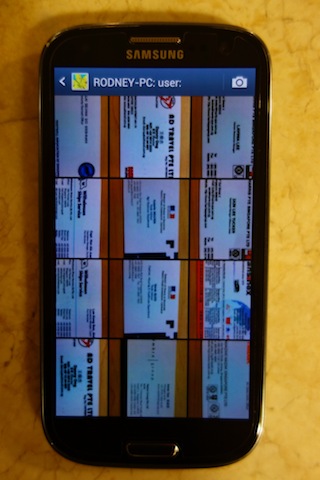 Albums belonging to other people I peeked at contained photographs from product catalogs and photographs of price lists, invoices, receipts, etc.

One particular album even had pictures of several passports.

Like I said, I am no gumshoe but maybe that PC belonged to a travel agent or a labor supplier?

I have to admit my curiosity was piqued and I looked at a few albums but each time I did that I knew I was satisfying my voyeuristic instinct and intruding into other people’s privacy but I was also hoping that I won’t see things that would shock me.

What must I do if I come across such photographs?

I was very disturbed.

Every time I was in my hotel room, I could see other hotel guests’ photographs in my phone’s Gallery.

I went to some Android forums but could not find anything substantial about such breaches or how to prevent them.

I also could not find settings on my Samsung Galaxy SIII to prevent me from viewing other people’s albums.

I suggest that all users of laptops should disable file-sharing and make sure that they are not inadvertently making their files public, unless they want someone to stumble upon them the way I did.

I don’t want to look at stuff I’m not supposed to look at.

And suffer the consequences for doing so.

I’m seriously considering switching back to iPhone the moment I touch down this evening.