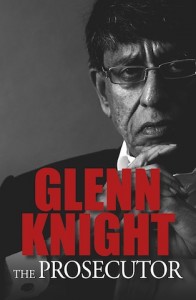 The first time I laid eyes on Glenn Knight I immediately concluded that he was a snob. It was at a country club here but there was nothing chummy or clubby about that guy. He looked like a bulldog. His stance and authoritative demeanor made him appear stern and unapproachable and he exuded an aura that actually struck fear in me. So far, he is the only person to cause me to feel that way. I found him utterly obnoxious.

Things are different now that we have been friends for more than ten years. (I am one of three “good friends” named in his just-published book, The Prosecutor. Allow me to say that it is an honor to be so named.) At the peak of his career as a Public Prosecutor and Singapore’s first Director of Commercial Affairs, Glenn was cruelly put through a baptism of fire and was brought to his knees to be publicly lacerated and humiliated. I now know him not just as a very human mere mortal like you and me but my eyes have opened to see him as an extremely intelligent and decent human being who believes in standing up for what is right.

Glenn’s book is guaranteed to cause a stir. It reads like a casebook and a spine chiller more than a memoir. In a way it is also a book about Singapore. Glenn’s views about some of the luminaries in Singapore’s legal circles – he calls them “the big hitters” – such as TT Rajah, Tan Boon Teik, Wee Chong Jin, FA Chua, Choor Singh (“the hanging judge”) and David Marshall are eye-opening. For those who want to know Glenn Knight the man, they too won’t be disappointed. The book chronicles the life of a very special person, his childhood and his youth. I didn’t know that he was a singer and guitarist in two bands and that he once walked from his school in Bukit Timah all the way to his home in Serangoon Gardens or that the only time he saw his father was when his father was lying in his casket. Glenn also talks about his struggles, his education at Cambridge and Harvard, his rise to prominence, his mistakes, his fall from grace, and his reinstatement. (Struck off from practicing law, he was only one of six lawyers to be reinstated in the Law Society of Singapore’s 35-year history.)

In addition, the book gives readers an insider peek at what happened at Pan-El, a case that resulted in Glenn being awarded the Public Administration Medal, Gold. Writing about Pan-El, Glenn mentions his apology to Tan Khoon Swan – a fact hitherto unknown. You’ll have to read the book to find out why. The book also offers Glenn’s perspective on the prosecution of JB Jeyaretnam, the Pulau Ubin murder, among other famous and infamous cases as well as the the gruesome Adrian Lim child-murder case. Glenn calls Adrian Lim “a most evil man” and writes that his murders of the two young children “literally shocked the nation because the public could not conceive that such evil existed in Singapore.”

Personally, I find the last chapter most fascinating. Was Glenn too smart for his own good? Did someone “upstairs” fixed him good and proper in order to send him a message? Was his downfall a sloppily-orchestrated attempt to “humble” him? Sorry, no spoilers from me. You’ll have to read the book yourself. Let me just say that if I were to be put through what Glenn went through, I wouldn’t have had the fortitude to deal with it. I would have suffered a meltdown. I know I don’t have the constitution for something like this. I would be broken and bitter for life. But for Glenn, if I were Chris Nolan making a movie about Glenn, I would call it The Grand Knight Rises! Glenn’s incredibly indomitable spirit saw him through what must have been the darkest days of his life. (He suffered a heart attack shortly after his arrest, his Public Administration Medal was revoked, etc.) He not only survived the entire ordeal of his downfall to be touched by that light at the end of the tunnel, he actually re-emerged triumphant and stronger, a much better man today than he was before, to teach me – someone who once found him repulsive – some very precious lessons, lessons I hope to pass onto my children, lessons every Singaporean should avail themselves of.

The Prosecutor is published by Marshall Cavendish and is available where all good books are sold. There is also a Kindle edition.

If you read nothing else this year, be sure to read The Prosecutor.

Do I sound like I’m gushing over this man? Am I biased? Of course I am, because, in the final analysis – no matter what the world thinks of him – this great Singaporean Glenn Knight, is first and foremost a friend, my friend.