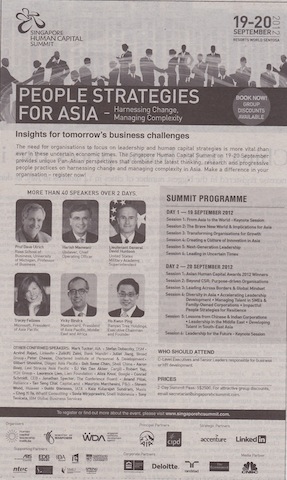 This ad has been making its appearances in the local press lately. It is for a S$2500/- per head two-day conference scheduled to start today. Organized by Ministry of Manpower, Singapore Workforce Development Agency and Human Capital Leadership Institute, and sponsored and co-sponsored by some 18 organizations it features mainly foreign speakers – of the six pictures shown only two are Asian.

Do the organizers think that we Asians can benefit only from speakers like a professor from the the University of Michigan (even though he may be a so-called “thought leader” on this subject), the COO of Unilever, a lieutenant-general from the US Military Academy and the president of Microsoft Asia Pacific? These people know Asia? Is this neocolonialism? When I was with the circus, there were Americans who have never traveled out of their countries – only a small percentage of Americans have passports – and they come to Asia, sit on a lofty branch like chimpanzees with zero knowledge of local settings and cross-cultural sensitivity and lord over us. Our grandparents and parents had to cower to colonial powers, but we certainly do not have to. I for one have enough of this “ang-moh-twa-kee” type of attitude. (For the clueless, do ask a Hokkien-speaking friend to translate that for you.)

Or is this ad simply a case of targeting and marketing? The same conference is advertised in other publications (like The Economist) featuring a more varied selection of speakers. In The Economist ad, six Asian speakers are featured, and only a couple of Westerners listed.

In any case, one has to be very naive to think that by attending a two-day conference like that, one can be equipped to formulate progressive, fair and equitable people strategies. Some of the speakers represent some of the most troubled and dysfunctional companies I know.

Conferences like this are so passé, Singaporeans should wise up.