Let’s Not be too Quick to Slay our Gelert! 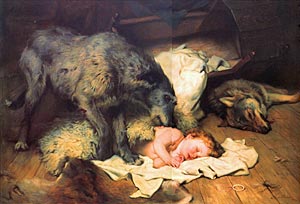 Legend has it that Gelert, a beloved dog charged with guarding his master’s baby was discovered with blood on his face while the infant was nowhere to be found. The shocked master, Llywelyn the Great, Prince of Gwynedd reacted by slaying the canine, only to afterwards find the unharmed infant lying next to a wolf his beloved companion has killed. Llywelyn is then overcome with remorse and he buries the dog with great ceremony. After that day Llywelyn never smiles again. It is said that until he died, the prince could still hear Gelert’s dying yelp.

How often have you acted on impulse?

Almost all of my knee-jerk reactions have caused me dearly.

The dog story reminds me of that mother who reported to the police when her son’s teacher cut his hair when the length of his hair contravened school rules.

It reminds me of the parent who demanded that his daughter be allowed to eat anytime of the day, claiming that she had a gastric problem. He filed a police report against her art teacher and wrote letters to the Prime Minister and senior management at the Ministry of Education when she was not allowed to eat in the art room

It reminds me of a friend who emailed his head office to offer suggestions for improving the local operations of the company he worked in.

It reminds me of Thai Airways ticket reservation hotline which is closed on weekends.

It reminds me of an ad put up by Cenosis, a company referring to itself as “the international slimming specialist.”

Ok, management of Thai Airways and Cenosis may not have acted on impulse. Perhaps they are just stupid.

I thought the mother must be regretting now at the furor her over-reaction has caused. But apparently not.

While principals and teachers say they were cheered by the Education Minister’s recent call to handle parents’ unreasonable demands with a firm hand, the mother has said she is disappointed that the case was highlighted by the Minister. If she is smart enough to appreciate the lessons in the incident she will realize that while her son’s haircut costs 60 bucks, the one given by his teacher is priceless!

What to do. Some morons just don’t know when to pull their dicks out in time.

As for the parent who wrote to the Prime Minister didn’t he paused to think a bit before doing something so stupid? Indeed what possessed such an idiot to do something so asinine?

They say insanity is hereditary. Daughter has gastritis, runs to daddy for help, daddy couldn’t convince the art teacher to let his daughter eat in class, so runs to Prime Minister for help. Parasitic cry babies all. They should be dick-slapped into unconsciousness.

As for my friend, because he went over his boss’ head and bypassed local management by going direct to head office, he is now trusted by neither head office nor local management. In fact, they think of him as a shit stirrer, a troublemaker.

And as far as Thai Airways is concerned, what retard will run an airline with a reservation hotline that doesn’t function on weekends? I had to call yesterday instead (being Monday) to resolve a ticketing issue but was put on hold from 8:35am to 12 noon. By then I had given up. Thai Airways has just lost a customer for life. Congratulations, fucking Thai retards! Lesson learnt: When dealing with Thais, always carry a huge bucket – the one I set aside to vomit blood in.

And for Cenosis, your recent quarter-page ad congratulated 100 women who lost over 500 kg with you and to reward them, you give them moon cakes. Don’t so-called “slimming specialists” – even self-proclaimed ones – know anything about the daily recommended caloric intake for women?

I can’t believe the things people do.

That stupid mother who made a police report over that haircut and others I just mentioned never cease to astound me.

In this day and age of instant this and instant that, it is so easy to shoot first talk later. Hit a button, send a complaint, be a cyber warrior, a keyboard hero. One can even hide behind pseudonyms. The Internet is proliferated with such shitheads who make senseless comments on people’s blogs.

Immediate reaction without first thinking things through may not be the best course of action.

Many people have had to eat their words for opening their mouths without first using their brains.

Khaw Boon Wan defended the National Parks Board’s purchase of those 26 costly foldable bikes (at $57,200/-) and when the public reacted, he had to call for an internal inquiry.

As a result of the investigations, the Ministry of National Development of which Khaw is the minister had to suspend its assistant director of the Park Connector Network Bernard Tay from duty. The case has been referred to the Corrupt Practices Investigation Bureau.

But never-admit-defeat Khaw has reiterated to the press that buying the foldable bikes was “a good decision.” “It’s the right judgment, how they acquired it is another story,” he claimed.

Well I suppose all of us can try to rationalize away things to justify our actions or verbal diarrhea.

It’s just that I cringe at such attempts at damage control and face-saving.

So would most people who have any gray matters.