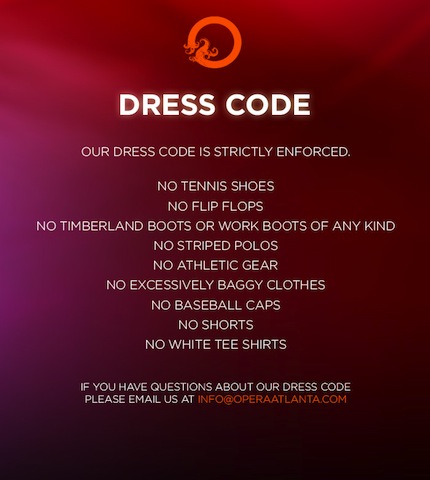 Picture above shows a sign from a nightclub in Atlanta.

These places should also employ staff to strictly enforce the dress code, meaning those inappropriately dressed will be turned away.

Went to another concert on September 15 and was appalled at how some people dressed. We saw so many couples in round-neck T-shirts, shorts and flip-flops. I’ve always dressed up.

If this is what they wore to a concert, I shudder to think what they would wear to a nightclub or to a karaoke.

I wonder why people are so sloppy. Surely the weather is not an excuse to be dressed like tramps. Perhaps it is a carry over from school. I spent six days at Singapore Management University recently and was aghast at how some of the female students dressed – most were in shorts, slippers and flimsy t-shirts! I spent a year in Seoul not long ago for a consulting engagement and was impressed that most Koreans even when they were out shopping on weekends, were all very well dressed – some even wore suits – and in summer!

I don’t think a tux is needed to watch a ballet at the Esplanade but come on, let’s be decent, shall we? It’s one thing to be comfortable but if you’re paying 200 bucks for a ticket, why dress like a tramp? Have some self respect! Let’s also show some respect to the performers.

Most of Sydney Symphony’s concerts are presented in the Sydney Opera House Concert Hall. Here’s what they say about dress code:

What should I wear?

We want you to be comfortable – there isn’t a rigid dress code for our concerts and jackets and ties are not compulsory.

Most people regard attending a concert as a special event and so dress for the occasion. Some wear the clothes they wore out to dinner before the concert, some come in the clothes they wore to work (suits, professional), some people enjoy the opportunity to dress up. But keep tiaras and ultra-formal wear in your wardrobe for when gala attire is specifically suggested.

There are free and secure cloak rooms on the Box Office levels of both the Sydney Opera House and City Recital Hall Angel Place: please leave briefcases, large bags, overcoats and umbrellas there.