I Eat (Free), I Extort, I Blog, I Publish Dining Guides, and Why Ruth’s Chris is an Epic Fail 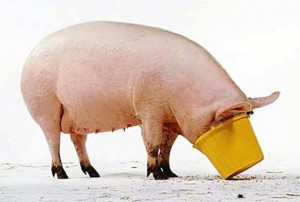 I may blog about food but I pay for every meal I eat.

I am not a glutton masquerading as a food blogger in order to stuff my face without paying a dime.

I am a steak lover who have eaten at practically every steakhouse in Singapore – from Jack’s Place, to Astons, to Bedrock Bar & Grill, to Angus House, to Outback, to Hog’s Breath, to Hippopotamus, to Prive Grill, to The Prime Society, to Skirt, to Wooloomooloo, to Morton’s, to Cut.

I’ve eaten many times at some of the best steakhouses all over the world – from Peter Luger in New York, to Prime in Sydney, to Gibsons in Chicago, to Hawksmoor Seven Dials in London, you name it.

And I’ve eaten at Ruth’s Chris outside Singapore twice.

Ruth’s Chris is now in Singapore and food bloggers and dining guides are gushing over it.

I spent S$370.80 there on October 10 but unlike the Ruth’s Chris restaurants outside Singapore, I consider their Singapore restaurant at Marina Mandarin an EPIC FAIL.

Thumbs down all the way, I’m afraid.

First the staff all appeared visibly nervous and rather inexperienced. Most are not local Singaporeans. But given the labor situation in F & B outlets, I don’t have a problem with that. That’s perfectly understandable and forgivable.

However, for the prices they charge for what they serve, Ruth’s Chris Singapore has committed the unpardonable sin – food that in my opinion was completely inedible for a restaurant of that stature.

The crab cakes were mediocre at best. The barbecued shrimp I ordered was chalky and definitely not fresh at all – trust me, I know my seafood – and my guest and I each had their signature filet but these filets tasted so absolutely bad if they didn’t cost 95 bucks each, and if my guest wasn’t been polite, we would have walked out there and then.

A good steak is juicy, tender, loaded with flavor, and has a minimum amount of fat but what was served was soft, almost marshy and could be mistaken for stewed beef! Also, I suspect the aging has gone wrong as the steaks smelt somewhat rancid. The flavor and texture from the aging did not have the flavor and texture of other steaks that have been aged correctly.

Aging of beef is a risky endeavor if restaurants don’t know what they are doing. Bacterial growth in the wrong temperature will rot the meat, making it completely inedible and possibly even a threat to the health of those who eat it.

I strongly suggest a good sense of smell to any restaurant that tries it. If your aged meat doesn’t smell right, throw it out. The steaks served to us that night at Ruth’s Chris deserved to be thrown away, to be honest.

Sorry I’m not been malicious and unkind but they were truly bad.

Ruth’s Chris website says “The memory of a great meal stays with you long after the table’s been cleared.” 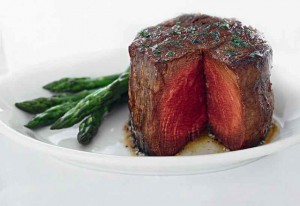 And food bloggers and publishers of dining guides gush over Ruth’s Chris!

Do these clowns know anything about steaks?

It was the worst dinner I’ve had in years. I was apologetic to my guest – in fact, I could’t be apologetic enough –  but being rather magnanimous, my guest just grinned and sat through the dinner. We were hoping that as we eat, our steaks would somehow get better, so we ate and ate but things got worse and worse and before we knew it, we had eaten most of our steaks – they weren’t huge slabs of meat, mind you (see picture above) – and we ended up finishing our filets eventually.

Yeah, so we finished our steaks but it was certainly the worst 190 bucks I’ve ever spent: 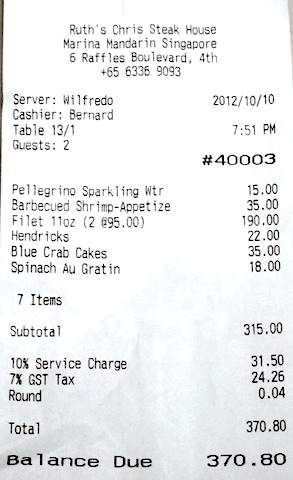 We were so disgusted we left without contemplating dessert.

I didn’t want to embarrass anyone by confronting the people at Ruth’s Chris.

I also didn’t want them to think I wanted a discount or a free meal.

The fact that we have both finished our steaks also kinda weakened our case.

So I just paid up and stormed out.

And I will never go back.

If I had been twenty years younger, I would have raised hell, kicked up a storm and created a scene.

That would have been so me twenty years ago.

But I’m an older man now, more mellow and no longer interested in fighting with people not worth my time fighting with.

Indeed, trying to reason with someone who is resistant to change, or stubborn or unlikely to appreciate any feedback of any kind is a totally pointless exercise in more ways than one – a fact I continue to be reminded of day after day after day, with increasing frequency nowadays. Many organizations – and individuals –  are way too vainglorious, narcissistic and self-centered to really bother about your well being. Some even make themselves completely inaccessible on weekends like this one mentioned here. And that’s the reality.

Anyway, what is the value of one diner’s opinion to a chain operating more than 135 steakhouses?

Especially when the chain’s Singapore restaurant is the new kid on the block – as far as steakhouses go – and is one that all food blogs and dining guides seem so excited about. (Just Google “Ruth’s Chris Singapore” and see what you find. You’ll know what I mean. All those accolades make me want to puke.)

In any case, it makes sense to trust your own discernment when deciding where and what to eat.

Do you rely on food blogs to decide where to go eat?

Do you consult restaurant guides to help you make your dining choices?

If you think that food bloggers are objective and non-commercial, you must have been very naive.

Sure, there are ordinary bloggers who blog about their eating experiences but there are many many more who go to restaurants, proclaim that they are food bloggers, ask for free meals, and demand to be paid so that they will blog about the places they eat at. Read about one such scumbag here.

When I eat at restaurants, I pay for my meals, I pay for every sip of beverage I order, whether I blog about the experience or not.

Sometimes I even show a picture of the receipt. (See above.) Don’t take my word for it, check out my other posts under Eat Drink Men Women and see for yourself.

Click here, here and here to understand what I’m talking about.

My advice: eat whatever you like at wherever you like, and don’t listen to food bloggers and publishers of restaurant guides who write positive reviews for ulterior motives.

Don’t be a victim.

Since December 2009, bloggers in the US are required to make “clear and conspicuous” disclosures if, for example, they write a restaurant review after having been treated to a feast there.

We should do that here!

Too many unscrupulous food bloggers and publishers of restaurant guides here are pigging out for free and then asking for money to write positive reviews.

Adam Smith said that it is not from the benevolence of the butcher, the brewer, or the baker that we expect our dinner, but from their regard to their own interest.

And food bloggers and restaurant guide publishers exploit that.

Also, those you are indebted to do not expect you to criticize them.

Surely you don’t bite the hand that feeds you, right?

Read about the scam behind restaurant guides here.