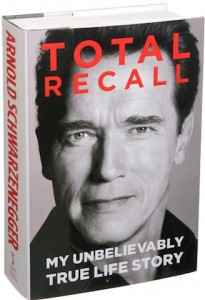 What a cheesy beefcake Arnold is.

Beefcakes’ brains are contained in their biceps. With Arnold Schwarzenegger, it’s no exception.

When Arnold Schwarzenegger was governor of California, a reporter asked about a Cohiba the meathead was smoking. “That’s a Cuban cigar,” the reporter said. “You’re the governor. How can you flout the law?”

Cuban cigars are banned in the US due to the country’s trade embargo with Cuba, but Arnold was smoking a Cohiba and he replied, “I smoke it because it’s a great cigar.”

That just about sums up the braggart’s philosophy of life, yet another example of how Arnold has prized self-interest above all else throughout his glory-stalking career.  His book Total Recall contains nonstop illustrations of how he aims high, tramples on competitors, breaks barriers and savors every victory, be it large or small.

About the bastard son he conceived with the family housekeeper, Mildred Baena, in 1996, the Sperminator says only this: that he had always promised himself not to fool around with the help. That once, “all of a sudden,” he and Ms. Baena “were alone in the guesthouse.” And immediately after that: “When Mildred gave birth the following August…”

There is no doubt that Arnold is a scumbag, but he’s a scumbag we love to hate. In fact, he’s quite a lovable scumbag. Arnold must be one of the trashiest people in the world to ever become famous. (Quite a lot of Singaporeans are on that list too and I may publish it one day. It is a list I have compiled.) And if you suffer from insomnia, his book is a rather good read.

When told by an acting coach to summon a sense memory of victory, he says, “I had to explain that actually I was not especially exhilarated when I won, because to me, winning was a given.”

And so it goes, on and on, ad nauseam. In 1977 he met Maria Shriver, who would become his wife and enthusiastic helpmate until the matter of Ms Baena and her son came to light. Although Arnold says that others wrongly imagined that to “marry a Kennedy” was one of his goals, he too speaks of their union as an accomplishment. Arnold, ever narcissistic, ever self-centered, when asking Any Warhol to paint a portrait of his wife, asked the artist “You know how you always do the paintings of stars? Well, when Maria marries me, she will be a star!” He wasn’t joking. He seriously thought that a Kennedy marrying an Austrian peasant with a Nazi accent will be a star.

Among other so-called achievements, Arnold claims to have been included in a decision-making meeting with Georgie Bushy about the initial gulf war invasion of Iraq.