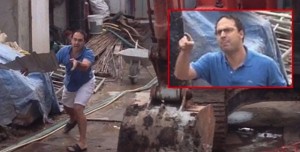 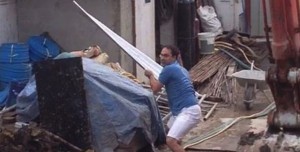 Olivier Desbarres, head of Barclays FX strategy in Asia was upset about the noise in his neighborhood, so he approached construction workers that had been building outside his house and – according to a video –  let out the following:

Debarres became even more enraged when he realized that one of the workers was using a cell phone to video-tape him: “You’re filming me? You think that’s good? Put your fucking phone down because I’m going to wait for you to come out and take that phone and shove it up your fucking ass.”

He then picked up a sheet of zinc and hurled it at the workers.

He threatened the lives of construction workers but he himself got screwed in the end. He lost his job. He is now ex-head of Barclays FX strategy in Asia. The 37-year-old French retard obviously has a very short fuse – at least three other police reports have been made against him by neighbors. Reason? He went after them when their dogs barked.

A case of Mad Banker disease?

Nah, just someone who doesn’t know how to manage his anger.

Remember Amy Cheong? She let lose with some very racist remarks online when merriment from a Malay wedding irritated her. Her employer kissed her sweet ass goodbye in a matter of days.

As this little island gets increasingly over-populated with people from all over the world, and as each of us, behind our supposedly civilized facades, underneath our various colors, strive to carve a little space of our own, while dealing with the stress that comes from living and working in this competitive melting pot, there’s going to be more and more incidences when we will get on each other’s nerves.

We need to be more tolerant and more forgiving and we need to manage our anger. If not, we may spend the rest of our lives regretting our reaction to the triggers that cause us to fly off the handle.

I had a terrible temper when I was young.

I once smashed a TV. I once threatened to throw someone ten floors down. I once hurled a durian at someone’s feet and I once threatened to smash the window of a car – acts of blind rage I still regret today. Thank God guns are not allowed here otherwise I would have gone postal countless times and gone berserk.

Nowadays, I try to determine what cause my temper to rise and avoid placing myself in those situations. At 55, I’ve learned a thing or two.

When I’m infuriated, I count to ten – or fifty – then count again. If a confrontation is still inevitable or necessary, I use “I” statements instead of blanket statements like “You always this” or “You always that” or “You people this” and “You people that.” I grit my teeth and try very hard to stay calm and talk to the person I’m angry with in non-emotional, constructive terms. It takes a lot of self control and strong will power. It’s not easy. But the alternative is often socially and morally unacceptable. So I swallow my indignation, bite the bullet and force myself to let go of whatever injustice – imagined or real.

Often, I seek catharsis by escaping into a diversion that will distract me and cool me down, like smoking a pipe or a cigar, downing a stiff drink or two, or letting go by ranting via a blog post.

He who angers you conquers you. I refuse to give permission to anyone to conquer me. I deny others the satisfaction of making me angry.