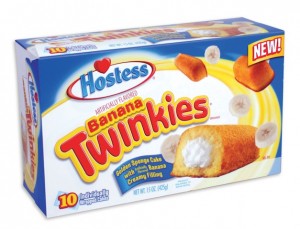 Rice with cockles cooked in some delicious chilli-based rempah and accompanied by achar – that simple dish from the nasi padang stall was a real treat to me when I was a young boy in primary school. And later, when the tectonic plates of tastes – and spending – shifted, and I knew how to enjoy nasi padang with a piece of beef rending, that was the height of luxury indeed in my then small, frog-in-the-well world.

Those days we made do with the simple things in life.

Late last week, Twinkie-maker, the 85-year-old Hostess, shut down its 33 bakeries and 565 distribution centers and fired 18,500 employees. Hours after the announcement, people in the United States flocked to stores to fill their shopping baskets with boxes of the cream-filled sponge cakes and their sibling snacks – Ding Dongs, Ho Hos and Zingers. Never mind the fact that these are some of the most revolting-tasting shit any human being can eat; never mind the fact that Twinkies are still produced in Canada by Vachon which owns the Canadian rights for the product from Hostess and not affected by the actions state side.

Back in the days when we had foreign servants at home, they used to be shocked whenever they see us coming home with bags of shopping. In their cultures, you make purchases only when there is an absolute need, and to them, it must have seemed strange that each time we leave the house we would return with bags of shopping. Bizarre Singapore culture, no one comes back home without buying something.

Maybe because my fortunes have changed or maybe I am indeed the man with everything but I now try to make a distinction between my needs and my wants.

Having done that, (and having succumbed to my wants once in a while), I must admit it is rather an eyesore to see friends and companions go on shopping sprees especially when they are with me, and especially when I know how much they make in terms of salary. The way some of them shop – six bottles of this, six bottles of that, I want this, that, and the other, and yes, that 10,000-dollar handbag and that 20,000-dollar diamond ring – seems rather extravagant, self-indulgent and narcissistic.

Are they shopping to satisfy some innate craving for attention because being a shopaholic is the only way to get attention? Sadly this is so for so many people, especially those who buy up half the bookstore and never read those books they buy – indeed I know of many people who shop, dump their purchases somewhere at home and never look at them again – or are they shopping to extend their life? All those supplements will only result in your urine being the most expensive in Singapore, really. And they always find ways to justify their purchases – cheap, discounted, I’ve heard it all.

Shopaholics need to know that they are victims of compulsive buying disorder. At least for now, I believe the Diagnostic and Statistical Manual of Mental Disorders – which is known as the DSM and is something like the bible of psychological maladies – does not list the condition as a disease. While shopaholism has been recognized by the German psychiatric community as a subset of obsessive-compulsive disorder, it still awaits its entry in DSM. To me the point is irrelevant. I look at the word “disease” and I see two words “dis” and “ease.” If you are not at ease unless you go on shopping sprees, as far as I am concerned, your mental health needs looking into. You need a “checkup from the neck up.”

But compulsive buying is nothing new. It was first mentioned in the early 1900s by two of Freud’s disciples, Eugene Bleuler and Emil Kraepelin, who coined the term oniomania – from the Greek root “onios,” which means for sale – to refer to those obsessed with making purchases. Bleuler wrote of “buying maniacs” for whom even the simplest expenditure “is compulsive.” He suggested the condition was akin to kleptomania, describing it as a form of “impulsive insanity.”

I think I will try be a hermit from now on, and avoid being with some spendthrifts. (What a word – people who spend and spend and spend are NOT thrifty!) This way I don’t have to suffer the pain of seeing them flush hard earned money down the toilet bowl. This way I don’t have to suffer the agony of watching spenders spend while the economy plummets, and many people in the world live below the poverty line (income of less than US$2/- a day). This way I don’t have to be reminded time after time that I can no longer indulge the way I did in my mindless youth. I will also reduce my trips to malls with such people – it’s like giving matches to pyromaniacs. Let’s meet at Starbucks instead. Yes, then they start buying cups!

Of course, it’s their money and they can do anything with it, not my business, but I can’t help feeling judgmental every time I am with some shopaholics or see them blog and tweet about their indulgences.