For Want of a Nail 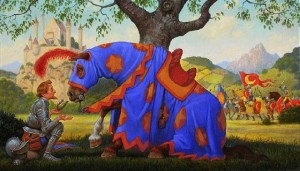 Small undesirable behaviors may lead to gradual and inexorable worsening.

If you claim that you care for somebody, walk the talk.

Your sacrifices and all that you have done may help a person in ways more than anyone else has but often it is the small little things that bring a smile to someone’s face – “how was your day?” or “I love what you blogged about” or “are you feeling better?”

The rhyme above is a good illustration of the “butterfly effect” and ideas presented in chaos theory, involving sensitive dependence on initial conditions; the initial condition in this case being the presence or absence of the horseshoe nail.

If you disagree and think that you are caring enough, you’re then most likely suffering from the Lake Wobegon effect, named after Garrison Keillor’s fictional town, a little town “that time forgot, and the decades cannot improve, where all the women are strong, all the men are good looking, and all the children are above average.”

This is evident in a variety of areas in their lives including intelligence, performance on tasks or tests, and the possession of desirable characteristics or personality traits.

There are lots of windows in a relationship and many of them have a terrible stench when you open them.

That is why many people fail at relationships.