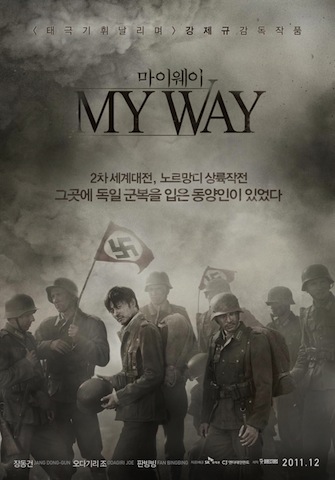 Four Koreans in German army uniforms were found on the beaches of Normandy when the allies landed on D-Day. How on earth did they end up there?

It seems that the Koreans, colonized at that time by the Japanese, had been conscripted into the Japanese Army but after being captured by the Russians at the Battle of Nomonhan in the Russo-Japanese War (part II, ie the 1940 one, not the 1904-05 one), they were pressed into service in the Russian Army. They were captured again, this time by the Germans in a battle near Moscow, and were next pressed into service in the Wehrmacht.

The experiences of these unfortunate fellows is the inspiration for Korean director Kang Je-kyu’s movie My Way. It was shot in several countries including China, Japan and Russia and is one of the most expensive Korean movies ever made, costing US$24 million to produce.

This year the film was shown in more than 20 countries including China, Japan, the US, the UK, Germany, and Australia.

If you haven’t seen it, you should!