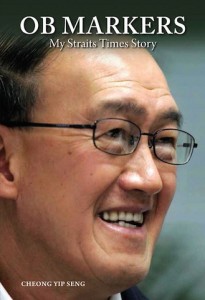 How do you like it if your job is one where the most powerful man in the country – the prime minister – can summon you to the Istana any time he wants and reams you good and proper?

Long story short, that was the job Cheong Yip Seng had. He was Chief Editor of The Straits Times, the most profitable newspaper in the world.

He spent more than four decades occupying the hottest of hot seats in Singapore media under three prime ministers, from the pugnacious Lee Kuan Yew to the wooden Goh Chok Tong – despite that , Goh suggested page three girls in the tradition of British tabloids – to the trying-hard-to-appear-affable Lee Hsien Loong.

I have just finished reading his book OB Markers – My Straits Times Story.

(The golfing term “OB markers” was first used by George Yeo to indicate that some topics must remain out of bounds to social activism and the media.)

Cheong’s first-hand account of the Singapore brand of journalism, warts and all, including why Goh suggested page three girls, and the nine pages on the annihilation of TT Durai, among many other anecdotes, is as close as one can ever get to the action from the man who was in the thick of it all. Cheong had nothing to hide, unlike the (unnamed) originator of an email that has been making its rounds, supposedly written by an ex-editor of Singapore Press Holdings and attacking the press in Singapore. Yes, biting the hand that fed it.

Don’t get me wrong; Cheong was no wussy puppet being pulled by a puppet master. This Penang-born boy made good was politically astute and is a survivor. In the course of his admittedly difficult work, he walked the corridors of power and got to see the world. He was able to comfortably raise a family, sit on hifalutin boards and lead a reasonably good life. Not bad for a newspaper man who didn’t even have a university degree.

I had resisted reading this book, thinking, like many must do, that The Straits Times is but a government “mouthpiece” so why bother reading a book written by one of its editors? However, I grabbed the book as I was leaving the house for a short trip recently – it was on top of a pile of other thick, heavy books, none of which seemed appealing at that point in time – Recipes from the Heart of the Home by Nigella Lawson? No thanks! – other than Cheong’s – and started to read it on the flight to Chiang Mai. I must admit I was immediately enthralled and couldn’t put it down. Some nights I read till 3am! It’s not just a memoir of a newspaper editor – the book is about why Singapore is Singapore today. At the risk of sounding sycophantic, I must say that Cheong’s book is a “must-read” for every Singaporean and PR because it reminds us of the volatility existing in this fragile, tiny island we call home. (I’ve since purchased several copies for friends.)

OB Markers – My Straits Times Story makes us question if western or ambush style of adversarial journalism offers a credible method of optimally serving the citizenry, as opposed to Singapore brand “development journalism.”

Hopefully Cheong’s heavy tome – the book is 452-page thick – will also serve to wake up the legions of anonymous malice-spewing bloggers and keyboard warriors hiding behind pseudonyms hell bent on stoking social tension and provoking the impressionable to take up arms against the government, instead of contributing to societal harmony and making efforts to heal schisms and drifts.

Cheong’s book should make us more circumspect in the things we say.  Cheong reveals why the task of balancing professional and political pulls was agonizing but unpreventable. All bloggers and those who comment on blogs – self-appointed and untrained “citizen journalists” – would do well to read it for their much-needed enlightenment.

Personally, it changed my mind about what I have always thought of Straits Times journalists. Although many are cocky like hell, earning them much opprobrium, I am now more appreciative of the difficult jobs they do.