It’s that Time of the Year Again 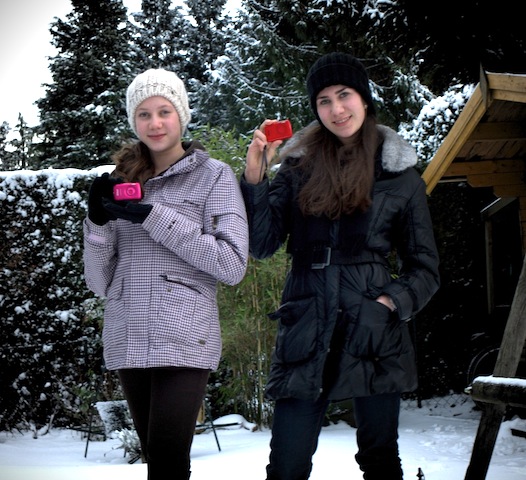 My friend’s daughters with the Nikon Ultra-Mini COOLPIX S01 cameras I gave them.

At this time, lots of people are going around buying and giving gifts, and of course receiving them as well; all part of the Christmas spirit.

In fact, December 26th is known as Boxing Day – traditionally the day following Christmas Day, when servants and tradesmen would each receive a “Christmas box” from their bosses containing gifts.

Some say giving is for the giver and there’s certainly some truth in that. For example, to curry favor, one may use the occasion to give something of value to those they wish to brown nose. A gift may be given to signal a message: “this is handmade by me, see how smart I am” or “this is expensive, cost me an arm and a leg, hope it’s enough to show how much I really love you” etc.

My wife’s sisters used to have the habit of telling my wife what their kids want and Yin would buy whatever they want for them. My sisters-in-law would also find out what my children want so that they can make the necessary purchases.

They seemed to have stopped this practice this year, much to my delight.

I wasn’t particularly excited about that practice because apart from it being so darn troublesome, I feel the recipient of any gift should learn to appreciate whatever gift he or she is getting. After all, we are talking about gifts right? A gift is something you get for free, for doing frigging nothing. We’re not talking about your shopping list, for goodness’ sake. Also, such a practice denies the person who’s doing the giving the joy and thrill of hunting down gifts for others.

Of course it takes a lot to be a smart gifter, if there’s such a word.

I know some people go to one-dollar stores and buy crap to give away. That’s the easy solution for them, I guess.

Then there are some who give away shit they have received from others and don’t want to use themselves. There is a fancy word for this dastardly deed: “re-gifting.”

I’ve also actually heard people presenting a gift to someone and saying “Hey this is for you, I’ve got lots at home, and it’s cheap lah, I got them at the pasar malam.” Terrible multiple whammy isn’t it? Dumping some worthless crap on you while insulting you big time.

The worse is the person who says “I don’t know what to get you, so here’s an ang pow for you so you can buy whatever you want.” Sure, cash is best but to me, this person has just demonstrated that he or she is bloody lazy, and makes no effort to be sensitive to my needs, and doesn’t really care about me, so the easiest way out is to give cash. That to me is a real cop out. (What I need: Cuban cigars, tobacco pipes, single malt whisky, fine cognac and encouragement to shave bald. What I want: the best massage chair money can buy, a visit to Harbin Ice & Snow World, a 13-inch MacBook Air, a Canon portrait lens that costs S$4399/-, the best electric shaver for shaving bald, that is, if I have received enough encouragement – and support – for going botak, and another solid gold Rolex.)

I like to take time – sometimes months ahead – to try to figure out how to show my appreciation for the people in my life, and then make special efforts to acquire gifts I will purchase for them.

But maybe I’m getting old and my energy is depleting. Or maybe it is my sciatica that’s causing me lots of discomfort. This year, for the sake of convenience, everyone in my pipe group received a tin of specially-blended Christmas tobacco when they showed up for our meeting on December 22nd.

As for the others, I just gave everyone a book.

Whether they will actually read it or not is really none of my bloody business. To be honest, they can wipe their asses with the pages from the books I gave for all I care.

A few to whom I wished to show my appreciation received coffee machines this year. One very special person received a MacBook Air from me. Another got a ruby ring. Julia and Laura, daughters of a good friend received cameras.

All others received books.

Oh, before I sign off, there are also some people who take and take year after year and give nothing in return. Since gift giving involves an expectation of reciprocity, these people must have skin thicker than that of rhino hides.

And then there are those who don’t even know how to say “thank you.” As for me, I appreciate all gifts received, no matter what they are and how much they cost – I cherish the idea that someone cares enough to remember me. Being such a sentimental bastard, that touches me big time. My mother taught me never to look a gift horse in the mouth, even if it’s from Daiso and is nothing close to what I need or want.

And some who return the gifts they received to the stores in which they were purchased and get money back – a practice not that prevalent here. Stores in the US would issue you a “gift receipt” you would attach with your gift so that your giftee may exchange the gift for cash. Defeats the whole idea of gift-giving in the first place, doesn’t it? But that’s the US, and Americans are strange.