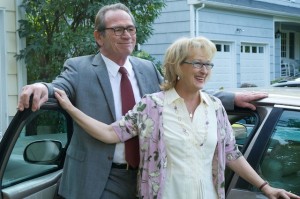 Kay (Meryl Streep) and Arnold (Tommy Lee Jones) have been married for 31 years.

Their kids have grown up and moved out.

Life has fallen into a set pattern.

He eats his breakfast of bacon and eggs over easy while reading the newspaper before going to work after pecking her on the cheek. After work he’s home for dinner, and then he’ll plonk himself in front of the TV watching golf, often falling asleep in the process. Then Kay wakes Arnold so the two can traipse upstairs to their separate bedrooms. (He snores, so he once moved into the guest room but never moved back.)

This is their routine, day in and day out.

They love each other for sure, but they are no longer in love.

There are no serious fights between them, no hostility, no overt unfriendliness. And neither of them has cheated.

But clearly the spark is gone from their marriage.

She books an expensive week-long counseling session in the (fictional) postcard-town of Great Hope Springs, Maine, with a therapist played by Steve Carell. (I wish they had used some other actor, I couldn’t erase The 40-Year-Old Virgin from my mind.)

Arnold declares it’s a waste of time and money, but he begrudgingly goes along and grumbles all the way.

Steve Carell asks them some intimate questions that almost give Tommy Lee Jones a fit – like what sexual position he desires and if he has any sexual fantasies. Tommy Lee Jones and Meryl Streep take turns storming out of the counseling sessions taking place over a week.

Another exercise involves Meryl Streep down on her knees trying to blow Tommy Lee Jones in a cinema.

Long story short, in the end things got better. Well, it’s a Hollywood movie after all. The movie ends with the couple renewing their vows in a touching ceremony by a lovely beach, family – and Steve Carell – in tow.

Such a boring married life such as that of Kay’s and Arnold’s – pre-counseling with Steve Carell, that is – won’t appear unfamiliar with people who’ve been married a long time and the movie will probably appeal to such people. It will resonate with them. A younger audience will probably cringe hearing parent-like characters talking about their sex lives.

In any case, I feel it’s a very enjoyable movie with two Oscar-winning stars that are such a joy to watch. The movie, written by Vanessa Taylor (Alias, Game of Thrones) is sad yet funny (some of the one-liners are really hilarious) and I feel every married couple should see it if they don’t want their marriage to deteriorate into a colorless, mundane existence.

The movie would make a great stage play too and I hope someone will do that soon.