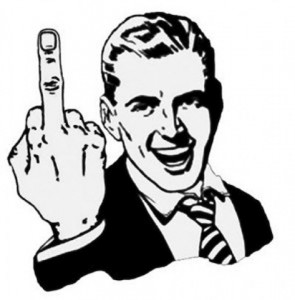 Governments like ours are the reasons why God gave us middle fingers.

So the prime minister became a tad emotional at Parliament the other day.

Hard as I tried, I couldn’t muster up enough sympathy for him.

Sorry, I came up short.

It didn’t have to come to this.

The PM has a difficult job.

More than once poor Hsien Loong had had to face the crowds and eat humble pie.

How many times would that be necessary?

Is that helping the PAP?

Saying “sorry” is a relatively easy thing to do for some people.

Hsien Loong did it again this past Sunday.

Don’t even need to show remorse.

During the last General Elections, a half-hearted apology of sorts was meted out, then promises made.

“If we didn’t get it right, I’m sorry. But we will try better the next time.”

But are things better since the last General Elections?

The outcome of the recent Punggol East by-election is the answer, my friend.

Voters circled their wagons around the PAP camp and told their candidate to buzz off.

There you have it, a maturing electorate who can sniff the bullshit from the efforts of the sincere and the genuine.

Yeah, you apologized for not having foresight, for poor planning, etc, then on the other hand, you brandish a Population White Paper designed to hollow out the country, diluting the core.

How could the world’s most highly paid government get it so frigging wrong?

How the White Paper was presented to the public would make a classic case-study on how NOT to fuck up royally, PR-wise.

The White Paper sets a 6.9 million people target for this island, making it the world’s third densest country by 2030.

The way it was introduced to the public made many balk before anyone actually read the White Paper.

According to the White Paper, the government intends to increase the number of permanent residents annually by 30,000, and new citizenships by 15,000–25,000 a year.

Thank you very much.

Just think of the harebrained, grandiose schemes that have failed: COE is a dismal failure, but what about the Park & Ride Scheme of 1975 and the government’s experiment with eugenics policies – the Graduate Mothers’ Scheme of 1984?

This time the population “debate” happened when Singaporeans learned that this island republic had become the sixth most expensive city in the world to live in, and that it has the third highest cost of living in all Asia.

What were these jokers smoking?

Don’t our over-paid and supposedly highly-qualified masters  know that the public needs to be engaged, that the public must share a sense of ownership, doesn’t our government know that the message is the medium, that using emotionless, poker-faced autocratic bigwigs and fucktards (who don’t even know how to make eye-contact with people) to blab about these sensitive issues will only serve to alienate the masses?

Like me, many are suffering from PAP fatigue. Yes, much had been done and we are grateful for that, but just look at the present leadership.

Book-smart but not people-smart is the kindest I can put it.

Like those McKinsey types who have tons of experience analyzing things to death but have zero implementation track record.

As if using untested Armed Forces fellas to run the SMRT isn’t enough of a joke.

Singapore is not one huge army camp, and the command and control method no longer works.

We are not your cannon fodder or foot soldiers.

Just you wait and see.

If you treat people like doormats, you will get your comeuppance one day.

The toes you step on on your way up are attached to the asses you have to kiss on your way down.

I’m sick to the bones seeing the desperate attempts of those in power constantly trying to extend their sell-by dates.

Even popes can resign so why do some of them give themselves fancy titles and continue to linger on like a fart in the phone booth?

Indeed is this present crop of “leaders” the best we have?

I say a regime change is not only in order but is long overdue.

But with clowns like Desmond Lim and Chee Soon Juan still lurking around, I’m not hopeful.

Oh yeah and don’t even get me started on Kenneth Jeyaretnam.

At least I know it’ll be over in an hour or two.

Quality is lacking all round, even within PAP ranks, as I’ve just mentioned.

Some of our MPs look like half the soccer team gone to fat.

Was it the good life? Was it stress? Was it emotional eating?

It’s hard to trust anyone.

I can’t help feeling if I was face down on the street bleeding, some of the opposition clowns as well as PAP MPs would probably kick me for good measure.

Being screwed by my own government is nothing new.

Anti-PAP sentiments is spreading quicker than the emergence of genuinely capable opposition.

So our future is bleak at best.

In the end, this place will be just another shithole, filled with people with either helped make it a shithole or people who thrive in shitholes.

I’ll be turning 56 next Friday.

Unlike some who never learned how to let go, I can ride into the sunset, with my head held high.

And fuck it all.

It’s my grandchildren’s generation I worry about.