Priced Out by Forbidding Costs 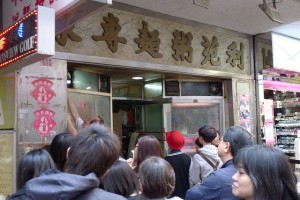 I go to Hong Kong very often but every time I passed by Lei Yuen Congee Noodles at Causeway Bay, I’ve never felt the pull to go in. The place looked old and the glass windows seemed to be coated with a layer of grime.

But when I was there end January, the place was packed – in the five days I was there I saw long lines every day and night.

Even reporters were there. Curious, I spoke to one and was told that the 42-year-old eatery was closing because the landlord has decided to raise the rental to HK$600,000/- a month and no way was it possible for the owners to carry on. So those in the know stood in line for hours to get their last fix of the eatery’s noodles and congee. (January 30th was it’s last day.)

Singapore is already the sixth most expensive city in the world to live in, and it has the third highest cost of living in all Asia so I supposed a day will soon come when many small independently-owned businesses will face the same fate as Lei Yuen one day.