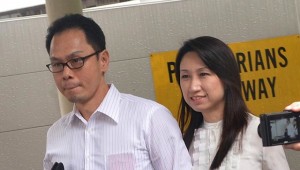 Former chief of Central Narcotics Bureau, Ng Boon Gay was found not guilty yesterday afternoon of obtaining oral sex from Cecilia Sue, in exchange for business favors. Ng could have been jailed up to five years and fine of up to $100,000/- for each of his four charges.

Last night, The Straits Times online reported said that Ng’s wife, Yap Yen Yen, was crying and holding a relative’s hand when the judgment was being read out and when the judge accepted her husband’s testimony to be true.

Asked later if it was the best Valentine’s Day present she had received, she nodded and smiled.

So what is worse?