Be Afraid, Very Afraid. Ava Lee Will Whip Your Ass! 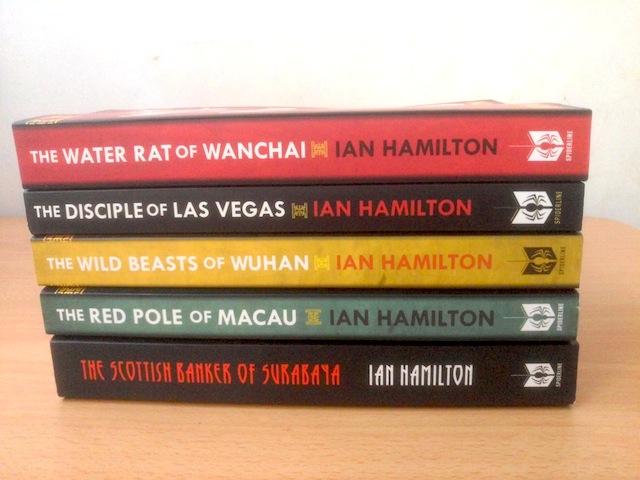 Ava Lee is a sexy lesbian with big tits. She’s in her 30’s. She’s a forensic accountant – whatever that means – but actually she’s a debt collector skilled in a deadly form of Chinese martial arts.

Owe money? Pay money! So Ava Lee goes all over the world to collect bad debts, flying at a moment’s notice and she will hurt, maim and kill to do it. She has no qualms sticking a picana up your ass. Ava Lee is Canadian-Chinese and her partner is Uncle, a well-connected ex-triad chief now sickly and old and lives in Hong Kong as an Eminence Grise. They keep 30% of every debt collected.

Ava Lee is the creation of a grouchy-looking Canadian author by the name of Ian Hamilton. His books featuring Ava Lee read like travelogues but are rife with factual mistakes and spelling errors for place names and the conversations are ridiculous – come on, nobody talks like that in real life – but them books are so fun to read and perfect if you’ve decided to kiss you brains good bye momentarily. (Their Flesch–Kincaid score is probably quite low.) Film rights have been sold to turn Ava Lee crime novel series into possibly the next The Girl With The Dragon Tattoo book to screen adaptation. Let’s just hope they don’t get Ming Na Wen – whom I can’t stand – to star in it or that auntie Michelle Yeoh or that whorish Bai Ling. Zhang Ziyi or Grace Park would be my choice.

Book one entitled The Water Rat of Wanchai (published in the UK as The Deadly Touch of the Tigress) won in 2012 for Hamilton the Arthur Ellis Award for Best First Crime Novel. This was followed by The Disciple of Las Vegas, The Wild Beasts of Wuhan, The Red Pole of Macau and The Scottish Banker of Surabaya. Hamilton’s publisher, House of Anansi, plans to roll out a new Ava Lee novel every nine months, so there’s more to come. The books get raunchier – in The Red Pole of Macau, Ava Lee asked for both heads to be massaged when she was in a massage parlor – yeah go figure that out – and in The Scottish Banker of Surabaya, Ava Lee masturbates.

Yup, them books are trashy as hell, but they are great reads, almost as bad as those churned out by novel-writing assembly lines put together by James Patterson, but they are so bad they are good so I read them to escape.

I’ve read all the books in the series. Book six, The Two Sisters of Borneo, will be released in February, 2014. I understand that Hamilton is already working on book seven.

But book six is next, coming out in February next year. That’s a long way from now. Sigh.

I guess I’ll have to make do with John Grisham in the meantime, or the increasingly long-winded and irritating Linda Fairstein.

I hope Hamilton writes more, and writes faster. I wish the same too for my other Canadian favorite, Linwood Barclay. His latest two, Trust Your Eyes and Never Saw It Coming are brilliant!

But Ava Lee is my guilty pleasure.