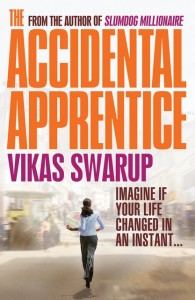 India’s Consul General to Osaka and Kobe, Dr Vikas Swarup, author of Slumdog Millionaire has written a book in the tradition of Eliyahu Goldratt’s The Goal.

Because of his position, Swarup’s book carries this disclaimer: “Though the author, Vikas Swarup works for the Indian Government, none of the opinions expressed in this novel are to be contrued as reflections in any way the view of the Government of India or of the author in his official capacity.”

Swarup’s latest Bollywoodish social thriller, The Accidental Apprentice, is about an ordinary girl plucked from nowhere by one of India’s richest businessmen to be his CEO.

It sounded like a joke or worse, a scam and naturally our protagonist Sapna Sinha rejected the eccentric billionaire’s offer but eventually circumstances forced her to accept the deal and to go along with it.

But there’s a catch! The girl had to undergo several “tests” – they aren’t academic papers or anything like that, but these “tests” were basically how she deal with everyday real-life situations.

These situations reflect the more unseemly side of India today – its slums, its child-labor racket, its rampant corruption, its child marriages, its honor killings, its human organ trade, etc and seek to capture the Zeitgeist of our times. Each “test” is accompanied by the billionaire’s preachy exhortation and theories about how to run a business, how to engage with people, the importance of foresight, etc.

An excerpt: “I can fire employees for cheating and disloyalty, not for an economic crisis they didn’t create. Before you fire an employee you have to think of the social costs, not just the economic benefits…Traditional corporations are callous and unscrupulous, driven solely by the need for profit. By its very nature, business is supposed to be about hard-headed economic decisions, with no scope for emotion. It is hard-wired to think only about making the most money possible, with no regard for the public good. I started out doing business like that, before realizing it was the wrong way. Now value comes first for me, and profit second.”

The book is a page-turner and could some may even suggest that it should be recommended reading for everyone in leadership positions or aspiring to be in one.