The Devotion of Suspect X 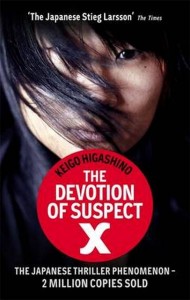 This is one book I couldn’t put down.

The Devotion of Suspect X is a 2005 novel by Keigo Higashino that has sold over two million copies in Japan and is said to be a national obsession.

In fact, Higashino has been hailed as Japan’s Stieg Larsson. The novel won Higashino numerous awards, including the 134th Naoki Prize, which is a highly regarded award in Japan. The novel also won the 6th Honkaku Mystery Grand Prize, which is one of the most prestigious awards in the mystery novels category in Japan. The English translation was nominated for the 2012 Edgar Award for Best Novel and the 2012 Barry Award for Best First Novel.

In 2008, the book was made into a Japanese film Suspect X, starring Shinichi Tsutsumi as Tetsuya Ishigami and Masaharu Fukuyama as Manabu Yukawa. It was directed by Hiroshi Nishitani.

The English language film adaptation rights were acquired by Kross Pictures in 2011, and is being developed in Los Angeles under a working title The Devotion of Suspect X.

Suspect X is so good I’m now reading another of Higashino’s book, Salvation of a Saint.