Is the Iron Lady Rusting in Peace? 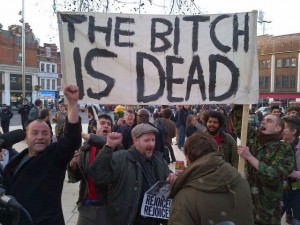 The Iron Lady is dead.

Clueless bloggers who were still in school when she ruled, raced to be among the first to post glowing tributes.

In some streets of England, even as accolades continued to pour in, parties were held to celebrate her death.

Speaking of her funeral, a renowned critic – a film maker no less – suggested that it should be “put out to competitive tender and the cheapest bid accepted. It’s what she’d have wanted.”

Ding Dong! The Witch is Dead had climbed to No. 1 in the singles chart as a result of a campaign by Thatcher haters.

Clearly Margaret Thatcher is a divisive figure in death as she was in life.

She might have put Britain on the path back to its glory – “Rule, Britannia” anyone? – but those who denounced her charged that it was the same handbag-toting, helmet-haired Boadicea who was instrumental for the closing of “unproductive” coal mines – with total disregard for people’s livelihoods – turning mining communities to ghost towns. (Perhaps she was thinking of Friedrich Nietzsche: “That which does not kill us makes us stronger” or Marie Antoinette: “Let them eat cake”? )

It was Margaret Thatcher who crushed the unions, who ruined the manufacturing industry of the UK, whose privatization initiatives led to massive job losses, and whose government covered up the Hillsborough disaster of 1989. According to those who detest her it was also the same Margaret Thatcher who wanted to leave the city of Liverpool “to fade and rot” and it was the same Grandma from Hell who stopped providing free milk for school kids – they still refer to her as “Margaret Thatcher Milk Snatcher.” Some think she’s evil personified, some think she’s worse than Hitler.

Others of course thinks she’s great.

But “great” is a relative term.

What makes a leader great?

Does being the first (and only) woman Prime Minister that England has ever had make you great? Wouldn’t that make one of the most corrupted politicians of all time, Gloria Macapagal-Arroyo great too?

Does being the longest serving British Prime Minister in the twentieth century for a consecutive three terms make you great? By the same token isn’t the Kim dynasty of North Korea, a kleptocractic regime established in 1948, even greater?

Does being obstinate and strong-willed make you great? Saddam Hussein was strong-willed. So was Muammar Gaddafi. Saddam was hunted like a vermin and eventually hanged. Gaddafi was shot, his body defiled just moments before his death – videos widely available online seem to show a stick being shoved up his ass . So much for being strong-willed. This much I know is true: When resentment boils over, all civility is lost as the carnal nature of human beings takes over and hatred rears its ugly head.

Does being the first to offer quick retorts and who must always have the last word make you great? George W Bush was quick to shoot from the hip, but he was an idiot. His moronic utterances could fill volumes. And let’s not even get me started on Joseph Estrada, Asia’s most laughable buffoon.

Does being someone who never cringe from telling your male cabinet ministers off make you great? Yes and see what that got you, Benazir Bhutto.

Thatcher’s demise could well serve as a timely reminder for some Singapore leaders to engage in some serious self-examination. Those who refuse to leave their perches and continue to hang on to them for dear life may want to do some serious thinking about their legacies. Better to go at the peak of your achievements than to cling onto that wobbly throne long after your expiry date. Some have argued that the street parties to celebrate Margaret Thatcher’s death have gone too far but truth be told, the Iron Lady’s too far gone for any of her enemies to celebrate her life, hence they can only celebrate her death.

In the meantime London bobbies are scared shitless that this Wednesday’s funeral of Margaret Thatcher will result in protesters turning it into a major fiasco. (Thatcher haters have vowed to dance on her grave.)

Don’t we live in interesting times?

Oh, and that’s supposed to be a Chinese curse.