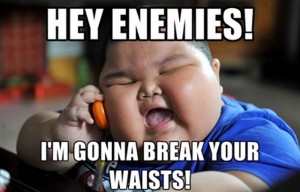 You threatened to “break the waists of the crazy enemies, totally cut their windpipes and thus clearly show them what a real war is like.”

What happened to you, Chubby?

I know you probably had a bad childhood, what with an egomaniacal grandpa and a schizo daddy but you attended school in Switzerland, didn’t you? And I was told you like basketball – to the extent that you actually invited Dennis Rodham to your country. And you like Eric Clapton too. You can’t be that bad, right?

I know it’s tough at your age to lead a country even though they’ve made you a marshal in your army. Yours is a resource-strapped land and your armed forces belong to the stone ages, if you don’t mind my saying so. And survival is always an issue. I understand, I understand, all that saber-rattling may well be for an internal audience for all I know, you having to consolidate power within your own country, yadda yadda yadda. But Chubby, you may not feel it but more than 24 million of your people – many of them starving – rely on you. Their destiny is in your hands. And you’ve just became the father of a daughter yourself, didn’t you? Think of her future too huh? Surely you don’t want their blood on your hands?

Just across the border your South Korean compatriots are living a life of prosperity. Radio stations broadcast propaganda and hard, solid facts to your people, who lap it up and are now part of the groundswell of discontent. Digitalized movies and books have made their way surreptitiously into your hermit kingdom and your people do get a glimpse of what life could be outside North Korea. Your closest ally, China, as close to you as “lips and teeth” are slowly turning against you as well as it strives to be accepted in the global community as a legitimate player among nations. Soon your foreign reserves may be frozen, i.e. if the UN and the US and its allies have their way, your borders closed permanently – shutting down the Kaesong Industrial Complex was a major error, an act of suicide, Chubby, something you brought onto yourself plus it will accelerate the permanent sealing of all borders – and in the end, your regime will be no more.

“At some point down the line, North Korea will cease existing as a country. Then the value of the coins will go up,” said a well-known American investor residing in Singapore – he bought up the entire stock of commemorative North Korean coins at a coin fair held in Singapore recently. You are aware of that I hope.

Chubby, do you know how serious this is? Do you know what dire straits you are in?

The world is prepared to forgive you and your war-mongering swagger and rhetoric. The US Secretary of State has declared that you will find “ready partners” in the United States if you decide to sit down and engage in civilized dialogs. We know you are young and I suppose you are entitled to a bit of tantrums and pouting – even me at my age throw tantrums and pout when I don’t get my way or simply just to make a point or two, but may I be so bold as to suggest that you be more circumspect in your choice of words, given that your military capability is in fact, a frigging joke – come on, let’s be honest – and that those defense nerds in Washington can kill via remote control using drones and other stuff without even leaving the comfort of the United States. I mean they can sit on their fat asses, push a few buttons and eliminate you from the surface of the earth, then go home and watch HBO with their families and have sex with their spouses like it’s just another ordinary day, you get me Chubby?

Plus there are always good old-fashioned espionage and tactics like CIA-sponsored assassinations that have worked in the past. I mean, come on Chubby, if they got Saddam and arrested Noriega, a baby elephant with a pale baby face who can barely walk without huffing and puffing is chicken feet, I tell ya. And don’t get me started on Mossad or MI6.

Chubby, you must be naive to think that behind the scenes, the intelligence forces of the free world are not already hatching concrete plans to – shhh – TAKE. YOU. OUT. You with me, Chubby?

Chubby, take a look at Myanmar, if those flip-flop-wearing Neanderthals can finally wake up from their delusions of grandeur and get real, so can you. And suddenly Myanmar is the new darling of everyone don’t you notice?

I had high expectations of you, Chubby. I had thought you would be different from your grandpa and your daddy. But I feel let down. Still, ever the optimist, I believe there is hope. Hope for you, your people and hope for the world. You can still set things right and gain some modicum of respectability. It’s never too late to go back on the right track. Why be marginalized and be treated like an international pariah, an infested rabid dog or a fat pathetic clown when you can restore the pride of your people and what could potentially be a glorious nation the world can be proud of and speak about in glowing terms?

So Chubby I urge you to rethink your strategy.

Seriously, self-contemplation is in order.

Back down, go on a retreat, take a break, do some somber thinking.

If you think your belligerence could be used to cajole America and South Korea back to the negotiating table so that you can extract concessions in return for promises of good behavior, then I have this to say to you, dear Chubby: It’s time you consider growng up k?!

Wise up, Chubby, brinkmanship and blackmail are so yesterday so quit screwing around, kid.

Not with that black guy in the White House, you got my drift, Chubby?

You think that guy got there by luck? Hey Chubby, we’re talking about the President of the United States, the same one who had Osama bin Laden killed, shot three times in the face, as a matter of fact. This is the new guy, very unlike his predecessor who was just another joker your dad could jerk around.

Chubby, I’ve said enough. The ball’s in your court now. It’s time for the prodigal son to come home to prelapsarian innocence.

It’s time you allow restoration and healing to take place.

It’ll be good for you. And good for the rest of the world. Above all good for the people – your own people – whom you profess to love so much.

And perhaps all that emotional eating will stop too.

And I can finally stop calling you Chubby.

Then, perhaps you can concentrate on getting a new barber and do something about that ridiculous haircut of yours.