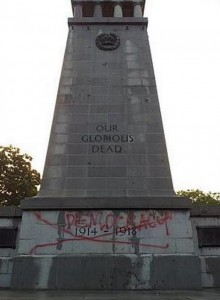 The structure was vandalized late last Tuesday night, according to some witnesses.

Located at Esplanade Park along Connaught Drive, the national monument was spray-painted with the word “democracy” in red with a big “X” under it. The “X” cancelled out the dates 1914 to 1918, which mark the period when World War I raged.

A contributor to citizen journalism website Stomp, by the name “deepsecret”, said in a post that her fiancé had chased after a man whom they spotted vandalizing The Cenotaph at 11.15 that night.

Other countries may consider graffiti as art but not here.

The vandal was caught yesterday morning. 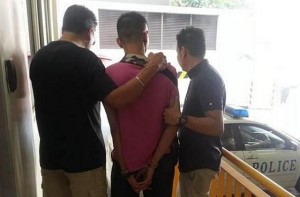 Now what to do with the motherfucker?

I say waterboard the bastard!

Then jail him for the maximum term mandated by the law and yes, cane him!

Yes, whip his sorry ass! (That’s actually mandated by the law too.)

And see if that retarded scumbag will try vandalizing another national monument again.